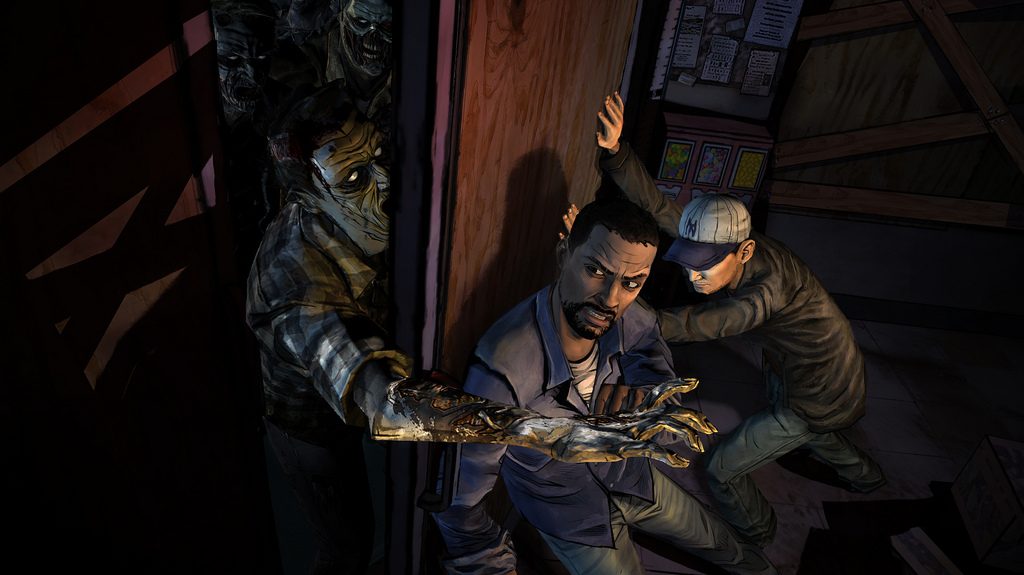 Share this on Facebook (opens in a new window) Share this on Twitter (opens in a new window)
Sid Shuman Senior Director, SIE Content Communications
14 Author Replies
Like many of you, I’m eagerly awaiting news on the release date of the third episode of Telltale Games’ superb PSN series The Walking Dead, a game that is intimately connected to the grim world of Robert Kirkman’s celebrated comic series.

I’ve long wondered just how involved Kirkman was with Telltale’s hit game series, so when I got a chance to interview him during Gamescom in Germany last week, I dropped my bratwurst and Kolsch and picked up the phone. I first met Kirkman during an interview for the late, great GamePro and, as always, the man is nothing if not humble about his considerable creative achievements. He modestly described The Walking Dead’s surge into mainstream pop culture as “a wild ride,” and expressed great satisfaction with Telltale’s work on the game.

My chat with Kirkman was short (he’s a busy man!) but it yielded some fascinating insights into the creative processes behind one of the biggest properties in comics, TV, and gaming.

PlayStation.Blog: Why did you choose Telltale Games to adapt the world of your comic to a video game series?
Robert Kirkman: The Walking Dead is a lot of things, but at its core it’s a dramatic human story that’s very emotional. Telltale came in with a proposal that involved doing a very different kind of video game. A video game that didn’t focus on shooting zombies or hiding from zombies or being chased by zombies…they focused on the emotional, dramatic component. It was a very keen focus on decision making and how that affects your characters, and also how those characters evolved over the course of a narrative. Telltale wanted to focus on the storytelling as opposed to the action, which I thought was really cool. They really got The Walking Dead, and they’ve done it justice.

PSB: Did you intend The Walking Dead game to be serialized from the start? If so, why?
RK: The serialization model Telltale does they do very well. The comic book is a serialized story, and I think it’s a cool thing to transition into a game. Being able to play a two-hour chunk of game and end it on a cliffhanger, with a period of time between chapters that builds anticipation for the next story is a cool aspect for the comic. I don’t think there was any “plan” to be serialized, but I think it was a cool carryover to Telltale’s business model.

PSB: So how much input did you provide into the type of game Telltale made? Did you have key creative mandates?
RK: We had a lot of macro meetings early on about what this game would be. In the very early stages, it was very important to me that this game would be something that mattered to the fans. So this game very much takes place in the world of The Walking Dead comic book, and it deals with things that exist there. And you can’t really tell a story like that if Rick Grimes is the main character. Because [the implication would be], “if this story is so important, how come we never saw it or talked about it in the comic? This is clearly a side thing!”

So very early on we decided to focus on a different character and a different story that would weave in and out of the comic book story in interesting and meaningful ways. But we also wanted it to be a standalone story so that the comic and game can complement each other without contradicting each other. We wanted you to experience them both and get a fuller, richer experience. So yeah, those meetings were something I was very involved with.

Talking with the guys at Telltale, I said, “The Walking Dead is sad. If you can make players sad, that’s really what we’re after here. You want to drive the emotional impact of what it would be like to live in this world, and if you can achieve that in a game, that would be amazing.” And that was something the Telltale team was already striving for — making this a really emotional experience, not just scary or exciting. Those were the kinds of decisions we made very early on. But the type of game it is, and the way the gameplay works, is all Telltale.

PSB: Did you have a broad vision for this game, story-speaking? Did you help write any of it?
RK: A lot of it was stuff Telltale came to the table with. They had Lee Everett, they had the storylines and other things. They were working with Gary Whitta — who’s a friend of mine and wrote The Book of Eli, as well as being a huge The Walking Dead fan — to craft this story. One of the things I’m so proud of as The Walking Dead expands is that I’m able to say, “okay, the comic book is mine.” I can make a good comic book, I’m a comic book writer.

So I’m able to step back and say, “Telltale knows how to make good video games.” I’m not going to come in and say, “we should do this and that” because I don’t make video games. Allowing an expert to come in and do what they do best, I think, is the secret to The Walking Dead becoming as big as it is.

PSB: Speaking of the novels, I recently finished The Rise of the Governor. And I understand the next book Road to Woodbury will focus on Lili, an infamous character from the comics. Will there be any tie-in to the game? Is there any chance Lili appear in future episodes of the game, for example?

RK: There will definitely be a character named Lili in the game. Whether or not that ends up being the same character we know and love from the comic and the upcoming novel remains to be seen. But yeah, the new novel comes out in October and I’m excited about it. The novel series, the comic series, and the video game all are intertwined in the same universe. Keeping that continuity straight is something that’s been very important to me, and yeah, we’ll definitely see them continue to connect in a lot of interesting ways moving forward.

PSB: Here’s a question from @iLLeGaL_sKiLLz: on Twitter: “I wish they would delve into the backstory of how the infection happened.” What’s your take on that? Is that a good idea?

RK: Well, I don’t ever really plan on doing that just because I feel like The Walking Dead is set in a very real, grounded world. Once you go past the fact that zombies are walking around trying to eat people, you’re gonna get more and more into the realm of science fiction. Any kind of explanation for why the zombies are walking around, to me, is just going to make it less grounded, less dramatic, and less real for the readers. I like keeping that as an unknown backstory that is really completely unimportant to our characters as the story moves forward. It’s not something that I definitively want to tackle.

PSB: Here’s a question from a Twitter user whose handle I misplaced: “Why do you hate us so? Why must you build up our love only to tear it down? Did someone hurt you?” I think he’s referring to the fact that you have not been shy about killing characters in this series.

RK: [laughs] I don’t know, I’m really just trying to entertain! I understand that it can be frustrating at times. I love the readers and I love the fact that they’re as invested in the characters as they are. I’m just trying to write a compelling and interesting story. When people are upset that a fictional character dies, it’s just telling me that I’m doing my job.