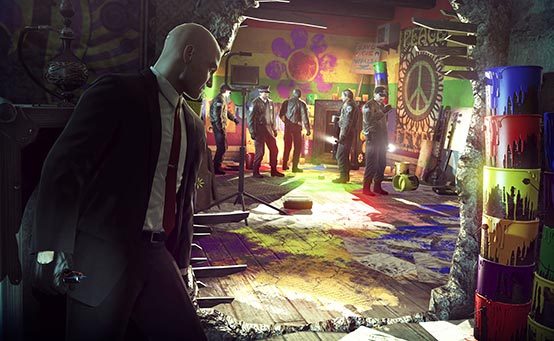 One of the best things about working with a vibrant and productive community, such as the one attached to the Hitman games, is that you can learn a lot by just watching people play. Going back to the previous games in the Hitman series, we’ve always enjoyed watching videos of how the fans tackle the different levels; both in terms of strategy and approach to the emergent systems within the game but also in terms of how they change the rules by going against the core of the level.

A great example is when we see people trying to set up mission parameters all by themselves. The previous games didn’t really support this – you were supposed to play a level in one of several different ways but targets always remained the same – but the fans pretty quickly started setting up conditions for completion themselves. Kill everyone with a particular weapon. Don’t get spotted by anyone. Only wear the chicken outfit. Kill that waiter in the bar at the Meat King’s party. Sometimes these conditions would be extremely hard to fulfill but equally satisfying when they did get completed. So for Hitman: Absolution, we decided to formalize a lot of that. The result – Contracts mode.

In Contracts, players get to create challenges for themselves and others through the creation of custom hits. All a player needs to do is choose a level, an outfit and a load-out, and, as he or she plays through the level, tag and assassinate up to three different targets – chosen from anyone within the level. The player is free to use any weapon or disguise brought in or found in the level but he must be able to complete the contract himself in order to save it and share it with the world. Contracts, then, is first and foremost a play to create experience where a player can play, create and share a hit and enter into competitions and tournaments (official or unofficial). Players can continually try to one-up their rivals and fight for the top slot on the global, local or friend leader boards attached to each individual contract. Because it’s asynchronous, Contracts can be enjoyed across time zones, and it isn’t dependent on having friends online.

By playing and completing contracts, players will earn in-game currency (amount depending on performance in each individual contract), which can be used to unlock more disguises, weapons and upgrades for specific weapons. IO will set up a number of featured contracts, select ‘best of the week’ contracts and feature those through the in-game notification system, and drop in once in a while to create some fun IO-made contracts as well. But what we’re really excited about is seeing the flood of user-made contracts as people start to wrestle the systems in Absolution to bring out some real brain teasers for us all to enjoy.

So, we’ve basically sat down and looked at how players were crafting new missions out of the ones that already existed in the game, and we’ve built the tools to let them do this in a formalized, organized and rewarding way. It’s going to be a grand experience seeing how much creativity the players can inject into the game once it comes out.

IO Interactive is showing off Contracts at a special event at Gamescom, and later in the week we’re releasing a trailer showing how Contracts works. Hitman: Absolution is out on November 20th, 2012.