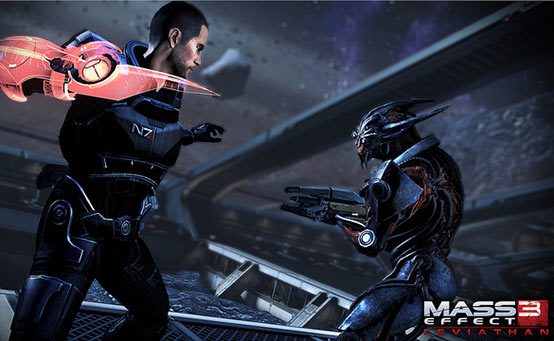 “Shepard’s story came to a close at the end of the game,” BioWare Producer Mike Gamble told the crowd at EA’s Summer Showcase last week. “But there are more stories we want to tell in the Mass Effect universe.” Leviathan is Mass Effect 3’s first story-focused DLC, and in addition to introducing new characters, weapons, and combat challenges it promises to expand on what we know (and what we don’t) about the most feared beings in the universe — the Reapers.

Set during ME3’s harrowing Reaper invasion, the expansion tasks Commander Shepard with tracking down an elusive entity that, according to legend, may wield the power to defeat a Reaper. Trouble is, nobody’s actually seen it. The story begins with an email directing you to the Citadel labs and one Dr. Bryson, director of the elite Task Force Aurora research group that investigates long-shot methods for halting the Reapers. The Protheans, it seems, were the first to suspect the Leviathan’s existence after they discovered a Reaper corpse centuries ago. This all bodes well for Shepard’s quest, but just as Bryson begins to pass along the key information, his lab assistant shoots him dead, mutters “the darkness cannot be breached,” and collapses. Was he indoctrinated? Is the Leviathan somehow responsible? There’s mystery afoot!

Shepard’s journey to pinpoint the Leviathan’s whereabouts will require quite a bit of detective work. As you pursue leads and uncover ancient artifacts, you’ll gradually home in on the Leviathan’s position in the distant reaches of the galaxy. Jumping forward in the story, BioWare demonstrated a rip-roaring combat sequence set after Shepard lands on a distant planet (nope, they wouldn’t share its name) suspected of housing the fearsome being. Perched on top of a derelict space vessel floating amidst an angry sea, you’ll fight off a savage Reaper landing party, even hopping into a nearby Triton mech suit to unleash heavy firepower when the going gets tough.

After clearing the deck, you’ll plunge into the frigid depths of the alien ocean in a spellbinding underwater sequence that reminded me of BioShock 2. In a Mass Effect first, you’ll explore the ocean floor from an immersive first-person perspective, firing off flares to illuminate your surroundings as unearthly jellyfish lazily drift by. Just as Shepard seemed to make an enlightening discovery, the BioWare representative abruptly quit the demo. Shazbot!

In addition to a lengthy new single-player chapter, Leviathan adds two potent new weapons: the pinpoint-precise AT-12 Raider shotgun and the devastating M-55 Argus combat rifle, plus at least one new weapon mod in the the Assault Rifle Omni-Blade. If that’s not enough, you can pick up the Firefight Pack on PSN tomorrow for $2 to score seven more guns for the single-player game.

Look for Mass Effect 3: Leviathan to to touch down on PSN later this summer for $9.99. Have questions? Leave them in the comments.