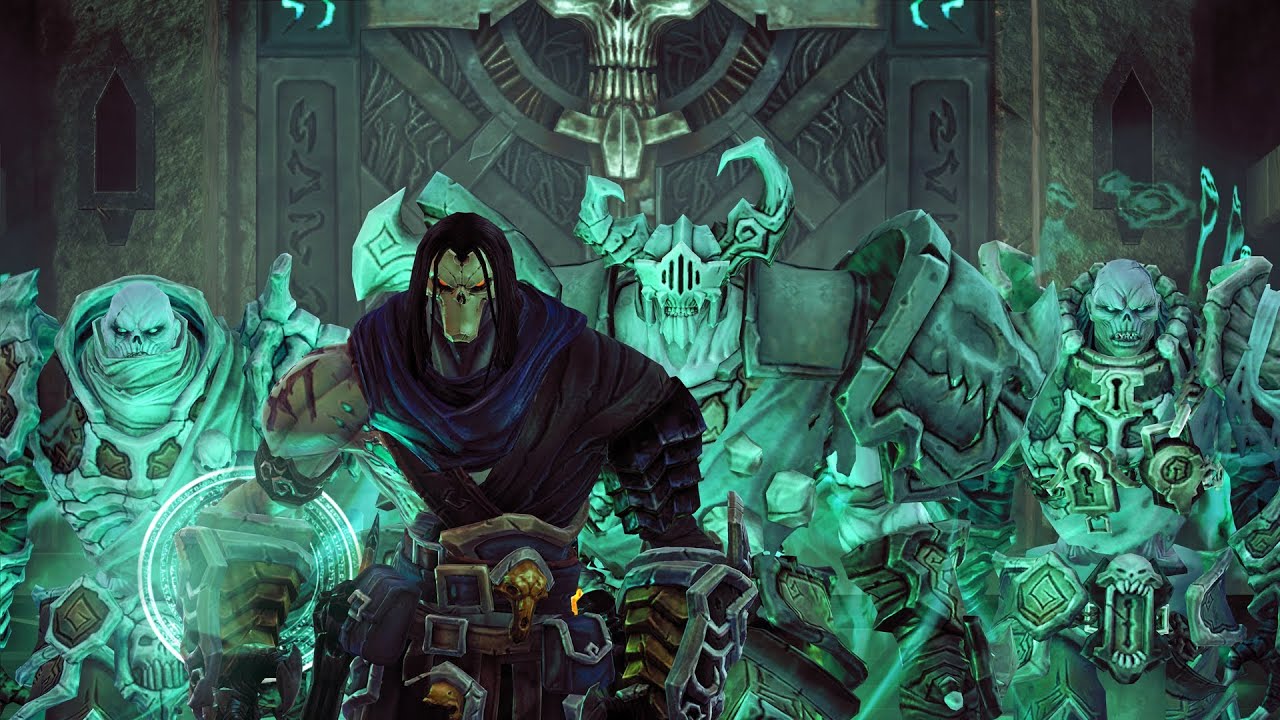 We’ve just released the first all-gameplay trailer for Darksiders II, which sees the most feared of the horseman of the apocalypse, Death, going up against some of the creatures from the game. The Ancient. The Corrupted. The Holy. The Damned… Death comes for all.

The trailer shows off several key characters from the game, but we wanted to provide additional context as the game marches towards its August 14th release date.

Death
Like his fellow Horsemen, Death is of a race known as Nephilim – among the most powerful beings in the Universe. When mankind received the prize of Eden, Absalom – leader of the Nephilim – led his armies against Heaven and Hell in an attempt to steal it back. For this crime, the Charred Council condemned the Nephilim to destruction. The Four Horsemen of the Apocalypse were granted a reprieve from this fate on the condition they aid the Council’s victory over their kin. The Horsemen accepted, but it was Death who bore the greatest burden of guilt for the near extinction of his race. Donning his iconic mask to represent his role as executioner on the day he slaughtered his brethren, he has not removed it since.

Dust
Death’s trusty sidekick is a bird of unknown origins, neither living nor dead. Dust will aid Death as he navigates the treacherous dungeons and explores the expansive overworld of Darksiders II.

Despair
Despair is Death’s loyal steed. Unlike the first Darksiders’ Ruin, players will have access to their mount near the beginning of the game. This will give them the power early on to use Despair’s combat abilities in open spaces, and to travel faster between different areas in the overworld.

Crowfather
Dark and mysterious, the Crowfather is a keeper of secrets. Like all things pertaining to the Crowfather, his race and origin are a mystery—though some believe him to be Nephilim as the Horsemen are. The Crowfather is sagely, lacking in patience and humour, but possessed of an ancient wisdom and knowledge of things forgotten… or best forgotten. Though he resembles an old weathered crone, the Crowfather’s mastery of arcane arts makes him a powerful force. His crow minions are fiercely protective, giving their very lives to strengthen his magic, or to defend against any threat.

Maker Elder
The oldest of the Old Ones, the Elder is withdrawn and contemplative. He moves and speaks slowly, with great wisdom and a sense of inner peace. As time progresses, his tone begins to reflect great sorrow. He has seen the end of all things, and knows that the march toward this inescapable fate has already begun. Death’s appearance in their world is unexpected, however, and the Elder sees it as an omen — or at the very least, an unexpected wrinkle that may change the course of fate.

Darksiders II comes to PlayStation 3 on August 14th in the US.