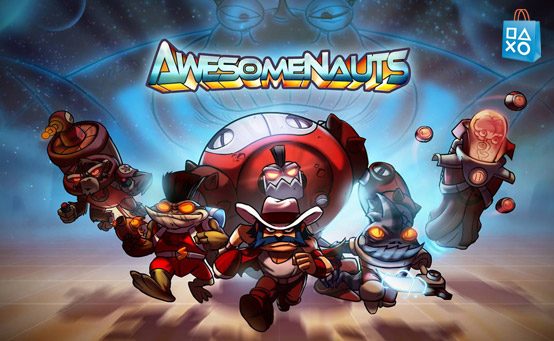 It’s been about two months since Awesomenauts launched on PlayStation Network, and we’re thrilled to see that the community has grown to be so active and vibrant. Teaming up with Sony to make Awesomenauts part of May’s PlayStation Plus offer has really helped to get our multiplayer platforming-shooter off to a running start. And now, we’re almost ready to launch the first big update for our game!

In this update, we’ve addressed two key concerns that we’ve heard from the community: balance and content. After two months of solid playing, we can confirm that the balance in the original version is pretty good, but not perfect. With this patch, we’re taking a couple of steps to further improve this balance, and bring it closer to where we want it to be. We’ve buffed some characters, and nerfed those who deserved it.

This patch doesn’t just bring boring stat changes, though. We’ve got some new characters for you, too! Coco Nebulon and Derpl Zork will join the original six Awesomenauts very, very soon. What we haven’t told you yet though, is that they’re going to be free!

So, let’s talk about Coco Nebulon – our first female character. She’s a space-surfing chick who comes from the watery world of Okeanos. She is great at harassing enemies with her Ball Lightning, which moves through everything and can be detonated at the press of a button. Whenever the tables turn, she also has a great move to punish chasers: a trail of slowing, damaging lightning particles. Basically, she’s great against everything that moves (but weaker against enemies that stand their ground).

And that’s where Derpl Zork comes in. His primary special skill is to turn his Combat Walker into a static turret with a heavy cannon that deals massive damage. Of course, he’ll be stuck in place until he transforms back — so running away from him shouldn’t be a problem. That is, unless Derpl uses his other ability, which places ensnaring traps on the battlefield. Derpl usually sits around in a field of traps, ready to blast anyone foolish enough to run into him.

Finally, Derpl has one last ace up his sleeve against enemies that try to get within range: the Trap skill actually changes into a Nuke-launching ability while in Turret mode. A large, homing Nuke that deals massive AOE damage — what’s not to love?

Coco and Derpl are both a lot of fun to play, and they add a lot of new teaming possibilities with the original ‘Nauts. We hope you guys have a lot of fun devising new strategies and tactics with these new characters, not to mention all of the skill and item changes we didn’t mention here. And for anyone who needed even more encouragement, we’ve added 5 more prestige levels!

We’ll see all you on the online battlefields soon!