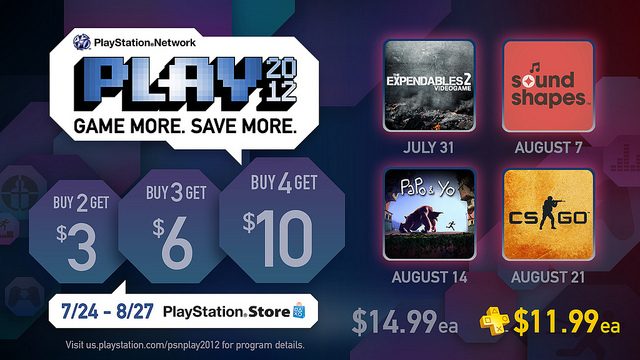 We’re very happy to announce the return of PlayStation PLAY, our annual summer program showcasing a diverse lineup of great PSN games and special offers. PSN PLAY begins July 24 on PSN when the first game in the lineup becomes available for pre-order, and we have all the info on this summer’s offering.

You may remember my announcement last summer that PLAY would become an annual program. Guess what? It has returned and we do have a stellar line-up of titles for you this year. We’re again offering 20% off each title for PlayStation Plus members for a limited time, and as a bonus this year, we’re giving you cash vouchers to redeemed on PSN for purchasing any two or more of the awesome PSN PLAY titles. Check out what you could get after buying PSN PLAY games: If you are a fan, you will also appreciate the fact that each of the four PSN PLAY titles in our line-up can be pre-ordered starting a week before they hit the PlayStation Store. Gamers who buy a PSN PLAY game during its pre-order period will receive a PS3 XMB theme of the game. PlayStation®Plus members also get 20% off each title during their pre-order period.

The best thing about PSN PLAY 2012 is still its line-up of great games. They all have something special to offer to PSN gamers.

Check out all details about the four PSN PLAY games:

July 31: The Expendables 2 Videogame (PS3) – Leading off the PLAY promotion and launching first exclusively on PSN, the latest and most explosive co-op action shoot’em up title coming to PSN, based on the popular movie franchise this game leads players right into the upcoming The Expendables 2 movie. The story begins when four Expendables (Barney, Gunner, Caesar and Yin Yang) are hired to rescue an extremely valuable, kidnapped Chinese billionaire. Featuring vehicular combat, four-player co-op story and challenge modes, and a wealth of exotic locales, The Expendables 2 Videogame offers everything an action-game fan could want. Pre-order The Expendables 2 Videogame starting July 24 for $14.99 ($11.99 for PLUS members) and check out the following trailer.

August 7: Sound Shapes (PS3/PS Vita) – Play, Compose and Share in a unique take on the classic sidescrolling platformer where your actions make the music. Equal parts instrument and game, Sound Shapes gives everyone the ability to make music. Play through a unique campaign that fuses music and artwork into a classic 2D platformer featuring artwork by Pixeljam, Capy, Superbrothers and more, with music by I Am Robot and Proud, Jim Guthrie and Deadmau5. Additionally, Sound Shapes comes to the PLAY program as a cross-platform title, allowing players to play at home on their PS3, or take it on the go with PlayStation Vita. Create and upload your levels on either platform for others to download and remix on their own. Sound Shapes creates an ever-changing musical community for everyone to enjoy, anywhere. Pre-order Sound Shapes starting July 31 for $14.99 ($11.99 for PLUS members).

August 14: Papo & Yo (PS3) – PSN exclusive indie game Papo & Yo tells the story of a young boy, Quico, and his best friend, Monster. Taking place in a dreamlike world inspired by South American favelas, Papo & Yo entices players to explore and solve puzzles as Quico, while simultaneously preventing Monster from eating poisonous frogs, which throws him into an uncontrollable rage. As one of PSN’s most-anticipated indie titles, Papo & Yo is a truly unique and beautiful experience that players can only get on PSN. Pre-order Papo & Yo starting August 7 for $14.99 ($11.99 for PLUS members).

Don’t forget to take advantage of each game’s limited-time 20% discount if you are a PlayStation Plus member, and keep your eyes on the PlayStation Blog for full blog posts on each of the PSN PLAY titles soon! For more information about PSN PLAY and the rest of the lineup of games available on PlayStation Network, please visit www.us.playstation.com/PSNplay.