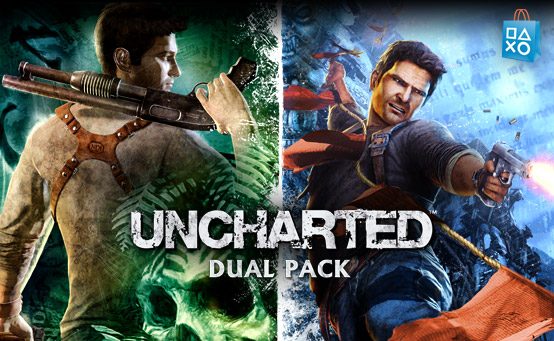 Hi Everyone –
We kick things off this week with two of the biggest PlayStation 3 games of all time are making their way to digital release for the first time. Uncharted: Drake’s Fortune and Uncharted 2: Among Thieves are now available to download! Pick up both games as a bundle for $39.99, or purchase individually at $29.99.

The Amazing Spider-man hits theaters next week (and from the sounds of some early reviews, it sounds awesome) but the game is available for download today in the PS3 Full Games category. Navigate through the Manhattan skyline with the return of the fan-favorite, free-roaming, web-slinging gameplay. With classic villains, visceral combat choices, and an all-new epilogue story to the movie, this is a release no super hero fan should miss.

PS Vita sees more great functionality with the YouTube App now available for download. With the YouTube application on PS Vita, you can watch millions of YouTube videos on PS Vita’s stunning 5” OLED screen. And with 3G, you can watch your favorite content – from comedy to gaming tips to viral videos – while you’re at home or on-the-go. The online portion of GT Academy 2012 may have ended, but that doesn’t mean you should stop playing Gran Turismo 5! Arriving this week are two new exciting DLCs – The Twin Ring Motegi Pack and Scion FR-S 12. Check out the dedicated post for more info on this content. PSP owners take note; there’s some great content this week including Unchained Blades. Featuring the work of developers from legendary games like Grandia and the Lunar series, this JRPG dungeon crawler boasts a unique combat system where teams of four characters battle and unchain monsters to unleash devastating abilities.

PlayStation Plus subscribers get some great updates today as well. You may have seen the news that the Journey Collector’s Edition is coming August 28th. While this amazing package will feature a TON of exclusive content (in game commentary, revealing documentaries, and more) PlayStation Plus members can now snag the core PSN Game Journey with a 20% discount for $11.99. You’ll also see the aforementioned Plus discount on new release Resident Evil: Chronicles HD, for 10% off, as well as 20 free Virtua Fighter 5 avatars to sport on your PSN profile. Note that next week we’ll be talking about the Plus outlook for July, so stay tuned.

ORDER UP!! ($14.99)
Experience the dizzying life of a top-notch Chef and restaurateur as you prepare a variety of dishes on your way to building your own restaurant empire from the ground up! Explore an island paradise to discover and play in fun and unique locations.
ESRB rated E
File size 1 GB

UNCHARTED: Drake’s Fortune ($29.99)
A 400-year-old clue in the coffin of explorer Sir Francis Drake leads Nathan Drake on a wild adventure to a forgotten island in the middle of the Pacific Ocean. Here Drake hunts for the fabled treasure of El Dorado.
ESRB rated T
File size 21.1 GB

Lego Batman 2: DC Super Heroes
The Dynamic Duo of Batman and Robin join other famous super heroes from the DC Universe including Superman, Wonder Woman and Green Lantern to save Gotham City from destruction at the hands of the notorious villains Lex Luthor and the Joker. Collect 50 DC Comics characters, flex your new super abilities, and master new suits and gadgets. Players can also explore Gotham City and unlock a variety of cool vehicles.
ESRB rated E10+
File size 1.18 GB

DUST 514: Bundle With Mercenary Pack ($19.99)
The DUST 514 Mercenary Pack Bundle contains everything new recruits would want to make a name for themselves. Download it now and make your mark on the galaxy!
File size 1.91 GB

Elevator Action HD – Additional Stages 6 ($1.99)
New DLC for ELEVATOR ACTION DELUXE has arrived! This update gives you five new stages to explore and master. Can you escape the building full of express elevators and other new features?
File size 11 MB

Mad Riders: The Daredevil Map Pack ($2.99)
The Mad Riders are back for more action, this time in Africa ! Compete in two exclusive championships across Zambia to unlock new vehicles and defy your friends online in 10 exotic races.
File size 73 MB

Mass Effect 3 Extended Cut (free)
An expanded ending for Mass Effect 3. Additional scenes and an extended epilogue reveal the impact of Shepard’s choices on the future of the galaxy.
File size 1.78 GB

THE PINBALL ARCADE ADD-ON 2: CIRQUS VOLTAIRE AND FUNHOUSE ($4.99)
Add-on Pack 2 for the Pinball Arcade: Cirqus Coltaire and funhouse. Purchasing this content entitles you to both the PS3 and PS Vita versions!
File size 34 MB

Magic: The Gathering – Duels Of The Planeswalkers 2013 Gameplay Trailer

Disney’s The Little Mermaid II ($5.99)
Explore the wonders of the ocean with Ariel and her daughter Melody in this exciting adventure!
ESRB rated E
File size 333 MB

Unchained Blades ($29.99)
Join brash and spiteful Fang in his quest for revenge against the goddess in this story-driven dungeon-crawler in a world populated by mythical beings. With a four member battle party consisting of a diverse mix of supporting characters such as a cowardly golem prince, a shy medusa girl, and a rebellious phoenix princess, explore grid-based dungeons and dispose of monsters in classic turn-based battles, all in first-person view.
ESRB rated T
File size 286 MB