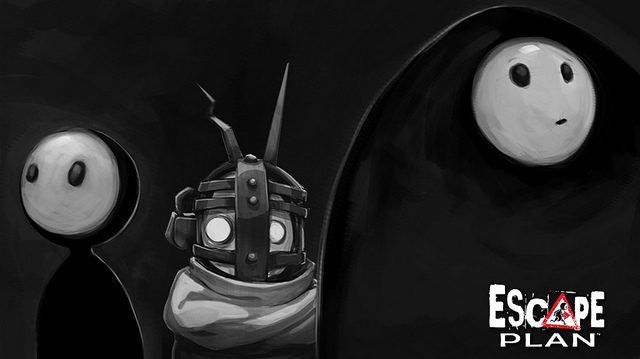 Update: An earlier version of this post cited incorrect pricing information. We regret the error.

It’s an insane time for Escape Plan, as we have a ton of new content launching for everyone this week: The Asylum DLC arrives for just 25 cents, Patch 1.02 goes live, five free Avatars are coming for PS Plus members and the Escape Plan Demo will be available for all PS Vita players – all with today’s PS Store publish!

Since launch, our fans have chipped in to provide feedback and thoughts on Escape Plan. All of these little nuggets of advice and tips have helped us to improve and change the overall experience, and so for a limited time, we’re giving back to fans by dropping The Asylum DLC from $4.99 to a just a handful of change — $0.25, to be exact.

The gameplay of The Asylum picks up right where Lil and Laarg left off at the end of Escape Plan. Lil and Laarg travel through a sewer pipe, only to find themselves in Bakuki’s Asylum. This latest conundrum is filled with padded walls, shocking minions, gruesome blades of mass destruction and even more helpless sheep.

The Asylum delivers a ton of crazy content, including the Lil and Laarg Dressing Room where fans can check out the God and Luchadore Super Pack costumes, with the Poindexter and Super Hero costumes unlockable by playing through all of the 18 Asylum levels.

Everyone will receive patch 1.02, which will give them the first two Dressing Room costumes for Lil and Laarg and a handful of gameplay improvements, but only The Asylum DLC will open up the new levels, trophies and remaining costumes.

For those who have yet to pick up Escape Plan, we are happy to announce the release of the official Escape Plan Demo! This teaser gives fans a taste of 16 puzzling levels from the original game. Be sure to give it a try and, as always, we’d love to get your feedback in the comments below.