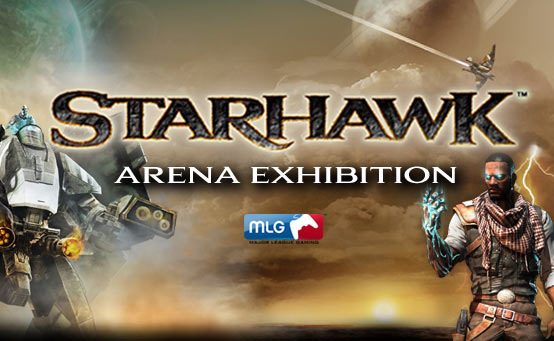 Tonight, MLG and PlayStation are bringing you an exclusive first look at tomorrow’s PS3 epic Starhawk with the Starhawk Arena Exhibition Powered by PlayStation. Starhawk is the spiritual successor to the PSone classic Warhawk. This third-person shooter allows online combatants to approach the fight in ways never before possible thanks to the all-new Build-and-Battle combat system. This new mechanic adds a layer of complexity to the battlefield that is constantly changing, and allows new tactics to develop as the match progresses.

In order to show off all the crazy action, MLG and PlayStation are bringing two pro gamers, Tsquared and Hastro, to the MLG Arena studios to get a first look at all the intense action. Tune in to the broadcast as these pros go through each element of the game, including single-player campaign, co-op, and the highly anticipated multiplayer modes. Acting as captains, Tsquared and Hastro will hop online to provide the first true showcase of competitive multiplayer action in all its glory.

The Starhawk Arena Exhibition Powered by PlayStation will be hosted by MLG personalities Chris Puckett and GoldenBoy, and will also feature President of Lightbox Interactive Dylan Jobe.

Of course, there’s more…throughout the show, PlayStation and MLG will be giving away tons of prizes and gaming gear to viewers. Be sure to follow @MLGAllAccess for your chance to win some awesome swag.

That’s it! Tune in to MLG.tv tonight starting at 5pm Pacific Time to catch all the action. (If you miss it – don’t worry, catch re-airs on Starhawk launch day, Tuesday May 8th at midnight and approximately 11pm.) Big thanks to MLG for making all this possible!