It’s a truly historic day here at the House of Ideas, as Marvel’s The Avengers is finally making its way to American theaters. I’ve seen it. It’s awesome. I’m pretty sure you’ll agree with me soon. (Maybe you already do.)

As Interactive Manager at Marvel, it’s been my pleasure to work with Zen Studios on the video-pinball adaptation of the film, which, as one of four great tables in Marvel Pinball: Avengers Chronicles, should be headed your way in just a few weeks. It looks a little something like this…

Cool trailer, I know, but you can see it pretty much anywhere. When Sid Shuman and Jeff Rubenstein – who preside over the PlayStation Blog with legendary Thanos-ian tyranny – demanded I present “a li’l somethin’ extra for our minions,” who was I to say no? So, here you have it, my fellow peons – five cool things about “Marvel’s The Avengers” pinball… 5) Zen Pinball 2!
“Marvel’s The Avengers” and the other three tables within the Marvel Pinball: Avengers Chronicles four-pack help to usher in Zen’s new PlayStation pinball platform on the same launch date (best I can give you now: “soon”). You can read all the details here, but the basics you need to know are 1) it houses all past Marvel Pinball and Zen Pinball titles under one virtual roof, 2) it does more stuff than those other two titles, and 3) you can switch between playing on PS3 and Vita at no extra charge. Excelsior, indeed. 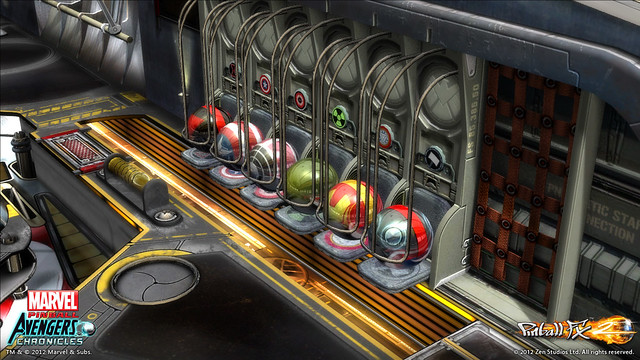 3) You’re Not Just a Ball – You’re a Character…in the Form of a Ball
In terms of sheer gameplay, this is what makes “Marvel’s The Avengers” one of the most unique video pinball tables you’ll ever play. As you may have noticed, none of the screenshots feature a traditional silver ball for this table – that’s because no traditional silver balls exist at any time while you play. Instead, an Avenger of your choosing – represented by the balls you see above – is dropped right into the thick of things, each boasting his or her own unique buffs based on character specialties. (My personal favorite: An exclusive bonus to the skillshot when you’re Hawkeye.) I look forward to watching the Zen Studios forums and seeing how sequence of Avenger selection affects the battle plan for all the hardcore Zen fans out there. 1) Movie Guys Helped Make It
This table was a true team effort. In addition to our games group here at Marvel and, most especially, the immense talent at Zen Studios, “Marvel’s The Avengers” features what may very well be a video pinball first – actual filmmaker involvement.

One of the coolest parts of the development experience for me was shooting ideas around with Executive Producer Jeremy Latcham, Creative Manager of R&D Will Corona Pilgrim and few others of Marvel Studios’ finest. They were genuinely enthused about the process, and I credit them fully with coming up with inspiring some of the missions, as well as the idea of having the Helicarrier act as the setting for the board. Once things were in full swing, Will was especially helpful, providing detailed feedback on everything from character animations to the minute details of the table’s script.

All told, the film team provided some invaluable ideas and feedback. You can tell there’s a lot of talent there – the type that’s capable of creating what very well may be the best super hero movie ever, I’d say…