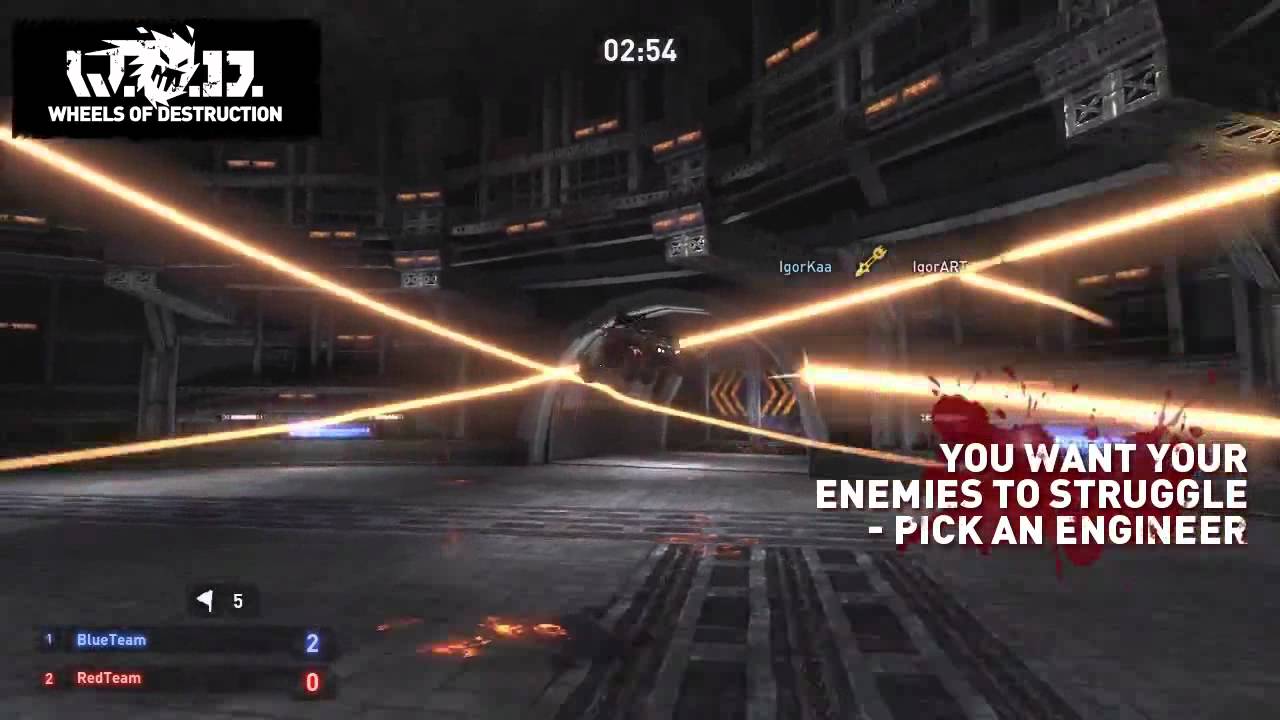 Wheels of Destruction is beautifully familiar yet dynamic and designed to keep the game balanced. Players who know class-based shooters like Unreal Tournament and Team Fortress 2 will instantly feel at home. The game has four weapon types, each with primary and alternate fire conveniently selectable on the d-pad. This simple and intuitive system actually provides 11 unique ways to decimate opponents.

The Gatling gun is the initial weapon that everyone has from the start of a match. Available to the player throughout, it never runs out of ammo but is relatively weak and imprecise. However, its alternate fire is tremendously powerful – it’s a very short-ranged spread shot shotgun with massive force. Players with great skill and a bit of luck can land an instant kill shot but, most of the time, you’re better off hunting for new weapons.

The next gun is almost as accessible and familiar – the rockets and mortar. Like many games, the rocket is pretty straight-forward. It’s not necessarily a ‘noobtube,’ but it doesn’t take much strategy to get in a quick kill shot. Opponents can certainly dodge these advances, but the mortar is a bit harder to avoid. This alternate attack lunges a rocket into the battle and creates a massive blast, hurling all affected vehicles into the air – allies included. Stunning your enemies can come at the cost of stunning your allies, but it goes a long way in a skirmish when enemy defenses are compromised. A cool tip: Expert players can master the mortar jump. Fire into the ground while accelerating to gain vantage points whenever jump pads and ramps aren’t close by, or use the mortar to knock someone off their ill-gained vantage point.

The flamethrower shoots catalytic additives that will happily melt metal. Cake on this plasma, and the damage per second improves exponentially. Keeping a predatory vehicle in the stream can be quite the task, though. Slower, heavier vehicles are the most vulnerable to the fury of flames. The fire ring, the flamethrower’s alternative fire, lights up all opponents within a set radius. This spread isn’t too vast — nor is it all that destructive — but players can fire haphazardly into a crowd, dusting off the smaller enemies. Both flamethrower and fire ring ignore enemy shields, so an opportune attack with this weapon can be perfect. If an enemy doesn’t die, the heat will drive their electronic circuits crazy and aiming becomes impossible while they burn. If you find yourself on the receiving end of an inferno, quickly pick up a repair power-up and you’ll be good to go. The rail gun is a weapon for true experts. It allows players to take out an opponent with a single surgical hit spanning the entire map; a player equipped with a rail gun in a strategically sound vantage point and has the battle field in their possession. The rail gun has a lengthy recharge, and a single shot turns all the attention to that player, but it’s worth it all for one great, tide-turning shot. The rail gun’s alternate shot is the BFG. Players can obliterate four to five opponents with a lucky shot. Because it’s an experimental prototype of a new future weapon, its behavior is not always predictable. Don’t waste it.

Players should find that the weapon system is varied yet simple. By having an accessible set of weapons, we allow the player to find a setup that’s comfortable for them. Ultimately, skill is always the winning factor – that’s how we built the game.