A Golden Fan of Escape Plan 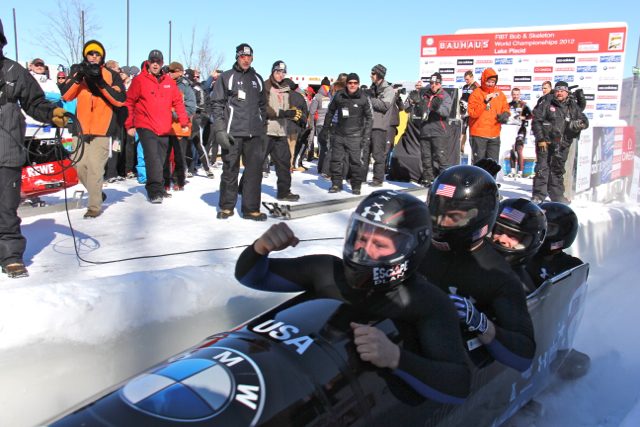 Just days after the official release of Escape Plan on February 22, 2012, the Fun Bits crew was invited to Lake Placid, NY to watch the 2012 FIBT World Championship (for Bobsled & Skeleton). As avid fans of the high-speed event, it was awesome to be there and witness USA-1 barreling into the finish to win Gold…with a big fat Escape Plan sticker on Steven Holcomb’s helmet.

Steven Holcomb (2010 Olympic Champion and 5-time FIBT World Champion) is a total video game junkie and it was brilliant to see his massively prominent support for our “Lil” game.

After receiving his Vita last week, he told us: “Escape Plan is awesome. It’s all about trial and error and I can definitely relate to that, as crashing at 85mph is sometimes as unforgiving as the mishaps of Lil & Laarg in this game.”

Not only did Holcomb play the game, but he was also given a sneak peek at some of the future features coming to Escape Plan. “You guys are so creative,” he said. “I really like where Escape Plan is going next. The fact that all these characters are also walking around in black rubber suits well, that cracks me up, as they look so…oddly familiar.”

Holcomb became the first U.S. bobsled driver in the history of the sport to sweep every event in one World Championship (2-man, 4-man & Team). At the 2010 Winter Olympic Games in Vancouver, Holcomb won the USA’s first 4-man gold since 1948, piloting “the Night Train.” Now that the season is winding down, Holcomb is stoked to get some more time for video games.

“My schedule is pretty crazy,” Holcomb said. “I’m in a different city every other week, so it’s fantastic to finally have a gaming system as powerful as the PS Vita to take with me for some serious gaming on the go. Thank you so much to Chris and the team for giving me something to look forward to now that the season is over.”

Video feed of the 2012 Lake Placid Event can be seen here.

Big thanks to Steve Holcomb and all the other fans who have reached out with their support on the game. If you haven’t yet picked up Escape Plan, it’s available now on PSN for $14.99. And if you didn’t catch it earlier, we did just drop the words: sneak peek and future features.