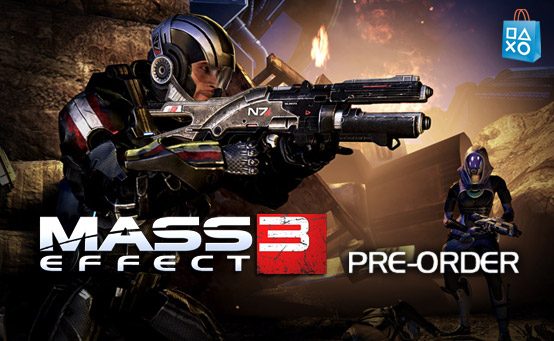 Hi Everyone –
With the official launch of PS Vita at hand, we’re augmenting last week’s PS Store launch on PS Vita with another stellar update as well as some new PS3 Full Games, world class demos and one pre-order opportunity you won’t want to miss.

To start, one of the biggest games of the year is coming straight to PSN, the same day it’s available at retail. Mass Effect 3 will be available to download on March 6th and to celebrate, we’ve partnered with EA to bring you a special pre-order on the PlayStation Store. Pre-order on the PlayStation Store now and get the M-55 Argus Assault Rifle and the Mass Effect 3 – Take Earth Back Theme.

PS Vita games are also easy to look to as the star of the show this week. Games like TALES FROM SPACE: MUTANT BLOBS ATTACK, Touch My Katamari and Plants Vs Zombies pepper the PlayStation Store with some great gaming experiences. There’s even a new PS minis triple pack from Grip Games with 3 of their best hits, playable on PS Vita. But don’t miss out on the other Vita-only experiences like the AR (Augmented Reality) games Cliff Diving, Table Soccer and Fireworks. You’ll also be excited to see the first wave of apps for Vita hit with Live Tweet, Flickr and Netflix arriving with today’s update. Starting today, you’ll be able to find all the above PS Vita experiences easily viewable from the PlayStation Store on your PS Vita and PlayStation 3. There is now a special PS Vita Games category on the PS3 PlayStation Store as well.

You’ll want to watch the PS3 Full Games category for great new additions with Mafia II and Star Wars: The Force Unleashed II. But if you’re looking for something more bite-sized to download, get your hands on EA’s SSX via the demo. It’s your first hands-on with the definitive version of the game as the PS3 version will have the entire Mt. Fuji mountain as an in-game exclusive.

There’s much more to uncover with today’s update so make sure you check out all the details below. Let us know your thoughts in the comments below or join the discussion on the PlayStation Community forums in the Official PlayStation Store Update thread.

Augmented Reality – Cliff Diving (Free)
Take the plunge with daredevil Diver Dan and use your AR Play Cards to build a series of high diving boards wherever you are. Perform elaborate dives and try to splash down safely to help Dan earn prize money as a handsome reward!
ESRB rated E10+
File size 400 MB

Hustle Kings ($9.99)
Hustle your way to the top of the global leader boards in this beautifully chic, yet minimalist pool setting. Control every move with intuitive front and rear touch interface and keep the game moving with quick push notifications.
ESRB rated E
File size 325 MB

Shinobido 2: Revenge Of Zen (Digital) ($34.99)
Decimate your enemies under the cover of darkness. The Shinobido series is back with unprecedented stealth action. Use devastating ninja skills, grapple hook, and other tools to freely explore and carry out your missions.
ESRB rated M
File size 1.1 GB

Touch My Katamari (Digital) ($24.99)
Roll everything from tiny ants to skyscrapers in this exhilarating “Shape-changing and Ball rolling” title. Change the ball’s shape with the flip of your fingers, expand the ball on a vast space or squeeze into gaps.
ESRB rated E10+
File size 660 MB

Plants Vs Zombies ($14.99)
The zombies are coming to the PlayStation Vita system! With both touchscreen and SIXAXIS Motion Sensor support, Plants vs Zombies on the PS Vita includes 50 zombie-zapping adventure levels, 5 original game modes, 43 trophies to collect and lets players create their own zombies with Zombatar.
ESRB rated E10+
File size 74 MB

Army Corps Of Hell (Digital) ($39.99)
Army Corps of Hell brings a new level of vicious combat, dark humor and lightning-quick action to the PlayStation Vita handheld entertainment system. As the King of Hell you control an army of goblin soldiers with various classes and abilities to defeat a host of enemies in order to reclaim your throne.
ESRB rated M
File size 625 MB

Dynasty Warriors Next (Digital) ($34.99)
Experience a new type of DYNASTY WARRIORS action created from a blend of the characteristic WARRIORS style simple controls with new intuitive controls made possible through the functions of the PS Vita system.
ESRB rated T
File size 1.5 GB

TALES FROM SPACE: MUTANT BLOBS ATTACK ($7.99)
Tales from Space: Mutant Blobs Attack is a side-scrolling puzzle-platformer about a hungry mutant Blob that escapes into the world and starts eating everything around him. Use touch and the motion sensor function combined with traditional analog stick controls to defeat and consume the pathetic humans.
ESRB rated E10+
File size 127 MB

NINJA GAIDEN SIGMA PLUS ($34.99)
One of the highest-rated action games is back and better than ever. Experience a new way to play Ninja Gaiden Sigma with motion & touch controls, tons of content, and new challenges to test even the toughest ninja.
File Size 2.3 GB

Unit 13
Jump into the action with Unit 13 for PlayStation Vita and conquer 36 tactical missions and 9 high value target battles as you help take down global terror networks and earn your place in the military elite. With the precision of the PlayStation Vita system’s dual analog sticks and the unique touch interface, Unit 13 is the perfect on-the-go action shooter.
File Size 845 MB

Hustle Kings PS Vita
Hustle your way to the top of the global leader boards in this beautifully chic, yet minimalist pool setting. Control every move with intuitive front and rear touch interface and keep the game moving with quick push notifications. Just be sure to hone your skills and earn cash before entering the bustling online scene.
File Size 325 MB

Hustle Kings Snooker Pack ($2.99)
It’s time to make your big break with this snooker table pack for Hustle Kings, featuring new cues, balls and tournaments to test your skills. Limited Offer: Purchasing this content entitles you to both the PS3 and PS Vita versions! To use this download, you will need Hustle Kings and a PS Vita System.
File Size 42 MB

Ultimate Marvel vs Capcom 3 Add-Ons x9 ($3.99 Each)
Limited Offer: Purchasing these add-ons entitles you to both the PS3 and PS Vita versions!
File Size 100 KB Each

Live Tweet
LiveTweet is a bespoke Twitter app that allows you to find and follow users, compose Tweets, Retweet and view updates from your friends, favorite celebrities and industry experts – all via your PS Vita system.

Flickr
Upload your best photos to Flickr and start sharing them with friends worldwide. Join new groups, create personalized photostreams and tell your own story online. Flickr is home to billions of inspirational photos – why not give yours a new home, too?

Mafia II ($19.99)
Vito Scaletta has started to make a name for himself on the streets of Empire Bay as someone who can be trusted to get a job done. Together with his buddy Joe, he is working to prove himself to the Mafia, quickly escalating up the family ladder with crimes of larger reward, status and consequence.
ESRB rated M
File size 7.5 GB

Starhawk Beta
Welcome! You are about to join Starhawk’s online beta and help create the next blockbuster for the PlayStation 3. Please remember that this is a test and your feedback will contribute to making a better game. We appreciate your participation. Visit StarhawkTheGame.com for more details!
File Size 1.27 GB

SSX Demo
Defy reality and own the planet by jumping into the boots of the classic SSX character Zoe Payne to complete a tutorial run in the Rockies, then experience reality-defying gameplay through Race it, and Trick it events. In this online enabled demo, compete against your friends on your own schedule by uploading ghosts of your best runs to the SSX servers in Explore mode. Feeling lonely on the mountain? Don’t forget to send the demo invite to a friend to unlock SSX trickster Mac Fraser! SSX is in stores February 28th, 2012 in NA and March 2nd in EU. Get your copy today.
ESRB rated E
File size 1.3 GB

Shank 2 Demo
The ex-mob hitman is back in action with Shank 2. With the updated arsenal of weapons and combat system, Shank 2 raises the bar from its original.
ESRB rated M
File size 1.22 GB

Ultimate Marvel Vs Capcom 3 – Viewitful Strange Pack ($3.99)
Get alternate costumes for Viewtiful Joe, Tron, Phoenix Wright, Dormammu, Nova, and Doctor Strange! Beat down your opponents in style with these stylish new outfits! Limited Offer: Purchasing this content entitles you to both the PS3 and PS Vita versions!
File size 100 KB

SSX: Online Pass (Paid) ($9.99)
Purchase your Online Pass serial code to receive the in-game cash you’ve earned from competing in Global Events, and unlock exclusive items including a snowboard, gear, and a mod and unlock exclusive content, Japan’s Mt. Fuji, one of the most iconic mountains in the world featuring unique drop points and more.
File size 8.7 MB

The King Of Fighters XIII Unlock All ($6.99)
Get access to all the unlockables now in a discounted bundle pack. *These items can also be unlocked by playing the game.
File size 6 KB

Hungry Giraffe – Minis ($3.49)
A 20 foot tall, 1200kg giraffe needs a ton of food each day just to survive. But, oh no! All the tastiest leaves have been eaten, while up in the sky endless streams of snacks, fruit and junk food hover just out of reach! Can you propel our long-necked, half-starved critter on his twisty-turny upward journey?
File size 21 MB

Touchdown Fever – Minis ($2.99)
Choose from a variety of formations & plays in this classic American Football game made by SNK in 1987.
File size 39 MB