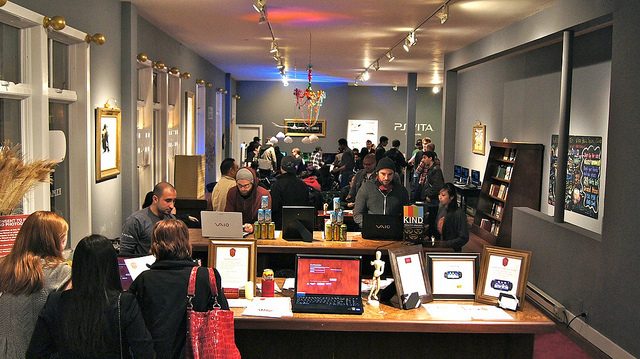 Thank you to the thousands of gamers who have stopped by one of the eight Vita Hill Social Clubs across the United States over the past few weeks. For those of you who don’t know, Vita Hill Social Club is the only place where you can walk in and pick up a PS Vita to play with for as long as you want (well, until closing time).

When: February 24th, 6:00 to 9:00pm local time
Where: Vita Hill social clubs in Atlanta, Austin, Boston, Chicago, Los Angeles, Miami, New York City, San Francisco (directions and info)
On February 24th from 6:00 to 9:00pm, get first hands-on with Mortal Kombat at Vita Hill Social Clubs nationwide and experience the world’s deadliest tournament in the palm of your hand! Mortal Kombat for PS Vita delivers new gameplay features and tons of new content developed exclusively for the revolutionary handheld system. Mortal Kombat features an all-new Challenge Tower II mode with 150 brand-new missions that push PS Vita’s capabilities to the max. No punches pulled! Mortal Kombat Vita brings all of the bone-breaking action from the 2011 console release for on-the-go gaming with all the warriors, including Kratos! Come and get your hands on the future of portable fighting in our special Vita Hill event.

When: February 26th, 3:00 to 5:00pm local time
Where: Vita Hill social clubs in Atlanta, Austin, Boston, Chicago, Los Angeles, Miami, New York City, San Francisco (directions and info)
On February 26th from 3:00 to 5:00pm, get deviant with PS Vita! Players will have five minutes to play specific games chosen by our Vita Hill staff. Every two players will have a dedicated staff member to look over your shoulder (no cheating!) to record your score. In five minutes, players have to get their best score on the mini game. Winners move onto the next round to play another mini game until there is only ONE left. So stop by during the week to practice your Little Deviants moves.