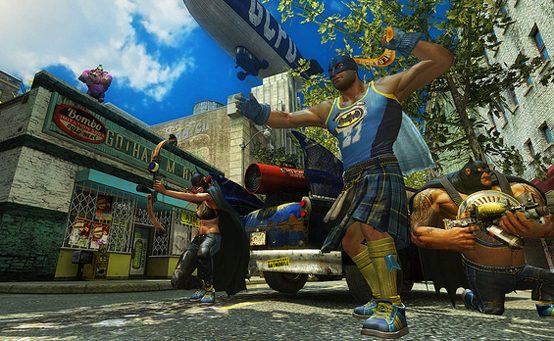 We pitched the concept for Gotham City Impostors several times before it was greenlit. Each time, people laughed. The first time, they laughed appreciatively because they assumed we were joking. “A downloadable multiplayer shooter set in the Batman universe featuring guns, killing, and a distinct lack of Batman? Good one!”

As they began to suspect we were serious, the laughter became strained. “You know there’s no way this will ever get approved, right!? Do you realize how many people would have to sign off on this crazy idea!? It’s impossible!”

Once we were able to communicate the vision for the game with imagery and audio, everyone was back to laughing sincerely again because they finally got it. No, it wasn’t going to be a traditional Batman game, but it was absolutely going to be an unabashed love letter to Batman.

But selling an idea to executives is different from selling it to other Batman fans. Let’s just say there was some skepticism when the game was first announced. Let’s also concede that there’s probably still some out there. I even had the opportunity to talk to some skeptics directly at PAX Prime and found there were three questions that kept coming up.

“Why a multiplayer-only downloadable game?”

The answer to this is simple. By the end of F.E.A.R., there was only a small group of us left on the project, fixing bugs and polishing the game. Once we got it out the door, we transitioned to what started as a modest multiplayer support plan but gradually and organically metamorphosed into F.E.A.R. Combat, a freely available release of the entire multiplayer portion of F.E.A.R. with additional modes and maps.

F.E.A.R. Combat was easily the most fun I’d ever had working on a game. The team was small and enthusiastic. Our development process was extremely flexible and highly efficient. And the game played well from day one and only got better as we refined it.

So when we found ourselves between projects with a team too small to create a full-fledged title, I immediately latched onto the idea of another multiplayer game. We had a solid, multiplatform tech base to work with, meaning we could be up and running right away. And we had access to one of the coolest franchises around. And I knew exactly what I wanted to do with it.

“Why impostors instead of the real Batman and Joker?”

One obvious problem is that in a match with 12 players, only one person gets to be Batman. While nobody gets to be THE Batman in our game, everybody gets to be A Batman Impostor. And that’s exactly what I personally love about Batman: he’s just like the rest of us… except with way more money and a much nobler moral code. In other words, there’s nothing stopping any of us from stepping up and becoming an “Almost Batman” except having the will to do so.

Another reason we were attracted to the idea of impostors is that the real world is already brimming with people who love to dress up like Batman knowing he’s a fictitious character. Imagine if he were real. You wouldn’t have to go to a comic book convention to see copycats. They’d be everywhere. Obviously, Batman wouldn’t tolerate imitators who went around killing bad guys, but as badass as he may be, he can only be in one place at a time, which leaves plenty of room in the city for impostors to rampage until he shows up to chase them away.

“Why use the Batman license at all if you aren’t making a Batman game?”

The simple fact is that it was specifically because of the Batman license that we were even interested in making the game. Not only does the impostor concept stand out in a marketplace teeming with military and sci-fi shooters, but we believed that the combination of Batman-inspired gadgetry with the ability to completely customize your loadouts however you see fit would result in a furiously paced, gravity defying, tactically diverse game experience unlike anything else out there. That’s not to say there aren’t plenty of similarities to other games, but it’s all about how the elements come together as a whole. To use an arbitrary food metaphor: Just because lettuce shows up in a lot of salads doesn’t mean you can’t make a standout salad with lettuce.

In the end, we hope that Gotham City Impostors makes you laugh heartily as you skewer opponents with an arrow to the face or watch them get zapped out the sky by an Airspace Denier gnome. We also hope that even though we don’t let you become the Dark Knight himself, that you still feel a little closer to him simply by dressing up in a tacky, homemade approximation of his totally sweet costume and engaging in a crass, morally suspect approximation of his vigilante cause.