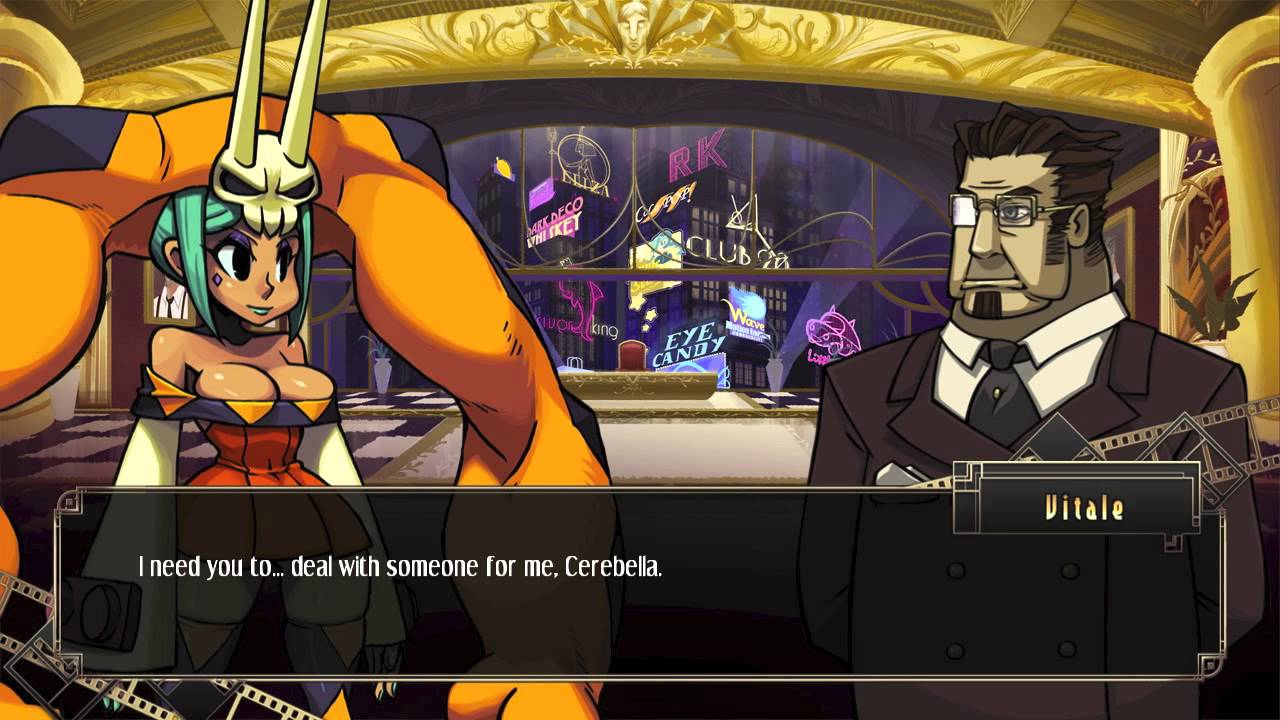 Previously on the PlayStation.Blog, I introduced you to Skullgirls’ story and characters and discussed its unique gameplay systems. Today, with the game racing towards completion, I’m here to shed a little more light on the game’s features.

Even though Skullgirls is a downloadable game for PSN, we’ve got a feature set consistent with a full-priced fighter.

Check out our new Story mode trailer above, which features Skullgirls’ awesome attract mode and glimpses at some of the characters’ stories. While there is a “true,” canonical story kicking around in creative director Alex Ahad’s head, the Story mode shows a number of “what if” scenarios playing out across alternate timelines. The characters are true to themselves in these altered circumstances, but events are unfolding differently.

In Arcade Mode, you get a single player campaign at its purest. You can pick any team size and make-up you like and fight a handful of rounds against the CPU and end with a climactic fight against… oh, I’ve said too much.

When you think about it, fighting games are really the only games left that doesn’t actually teach the basics of how to play them, so we’ve created an extensive series of tutorials.

Not only will these teach you how to play Skullgirls, but they should also help you learn the concepts underlying the fighting game genre as a whole. There are 17 courses explaining basic and advanced concepts, from movement to hit confirmation and advanced tactics, some of which use AI to help you learn. Of particular note, we’ve put a heavy emphasis on teaching defense, something of vital importance that is glossed over in most other games.

Of course, for the most dedicated of players, we’ve got a Practice Room to help you work on your game. In addition to a visual timer to display hit-stun and block-stun to help you learn combos, we’ll also have attack data and hitboxes to help you wring every bit of damage out of your favorite characters. Of course no fighter these days is complete without online play, and we’ve got that covered. Skullgirls features ranked and unranked online play using the excellent GGPO networking library.

We went all out on Skullgirls’ music and signed the legendary composer of Castlevania: Symphony of the Night, Michiru Yamane, but after hundreds of hours of play even the best soundtrack can wear thin.

One of the first feature requests we had from PlayStation 3 owners was a custom soundtrack option, so I’m happy to announce that we’ll be delivering this surprisingly rare feature with the game.

Finally… Trophies. Trophies are a requirement for all games these days, but we went the extra mile and created four exclusive Trophies for PlayStation 3 users.

There are a lot of complaints out there about fighting Trophies in fighting games, so we sought out forum feedback before designing ours so we could deliver the most satisfying Trophy-hunting experience possible. We think we’ve come up with a pretty good set.

We’ll be releasing more information about the specific Trophies in the coming weeks, so keep an eye out for that!

And that wraps up the features — in the coming weeks, we’ll be announcing the 8th and final character, the release date and price, and… more.