The Making of Stick Man Rescue, Out Tomorrow on PSN 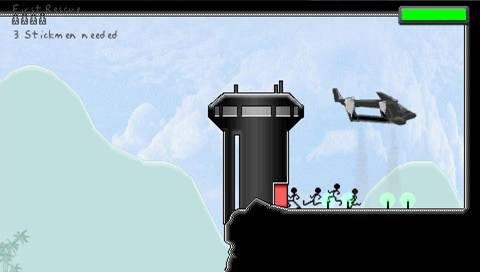 Stick Man Rescue was born of a conversation with my 12-year old son, Colin. He had just discovered the freeware Pivot Stick Figure Animator and, like any 12-year-old boy would, he was using it to make hilarious death animations. Given that game designers are perpetual 12-year-olds at heart, I joined in. This prompted visits to various stick man death websites which provided a surprisingly long-lasting source of giggles that attracted my younger son. Soon the three of us were pondering how to make stick deaths into a video game.

Dusting off my rusty programming and non-existent art skills, I co-opted my kids to start making animated gifs of stick deaths and created a prototype game bent on seeing how many of our most ridiculous ideas could be worked into it. So, I had a prototype as you can see, but had a long way to go to turn it into something that could be useful for a real game design.

Working at a publisher and developer like TikGames has its advantages. First, there are a bunch of talented people around to help hone ideas into something that works. I enlisted the help of Adrian Ludley, our Creative Director, who gave the game its look. He drew this for us to get the art team started:

Key to the fun factor of the game was how to get levels built and put into the game engine without having to write a bunch of custom tools. Custom tools are nice, but require significant dedicated engineering resources. We opted to use a modified version of “Tile Studio.” Straight-forward as this tool is, it covered our needs and learning to use it didn’t require too much time up front. It served us well. Its output looks like this… not super WYSIWYG, but really easy to use and quick when corrections need to be made.

The 30 deadly levels came about thanks to this tool and the help of colleagues like Allen Widner and Bob Goad. I enlisted my family to help not just with the concept, but also with more of the game. All those voices of stick men yelling “help” or “thank you” or “Aaaaaahhhh” are just recordings of my wife, my kids and me that were sped up using “Audacity.”

Nothing gets fun by itself. In the end, you have to play your game. When you’re done playing your game, you tweak it, tune it, polish it, and then do the whole process over and over and over. This is where game developers find out just how much they actually LOVE games.

Tuning can’t happen properly without a very important set of people… friends, family and random strangers who you can con into playing your game. These people are needed because by the time a game is getting ready to be tuned, every member of the team has played it for literally thousands of hours. If we tune the game to our own skill level, no player on earth, no matter how talented they may be, can hope to play the game and have fun. Now that the tuning is done, I hope everyone whose so inclined will laugh, swear and scream their way through this irreverent homage to the art of stick man murder.