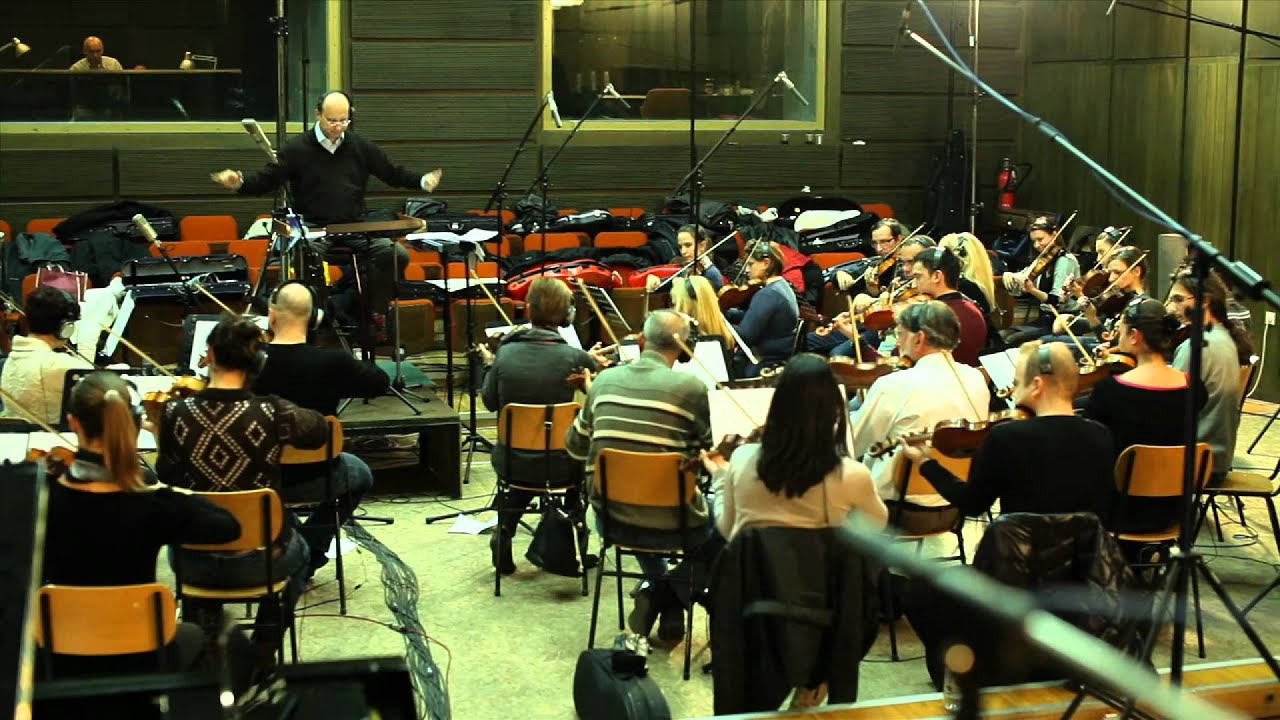 Probably the most frequently recurring difficulty in discussing my work on Journey is the fact that the game is called Journey! That concept of a metamorphosis, or emotional arc, is at the core of everything in this game, including its score. You can imagine, with a title this succinct, that the puns are both unintentional and constant! The video you see here will give you a taste of what we’ve been up to and the joy that it’s been to create.

One of the inspirations for Journey was Joseph Campbell’s ‘Hero’s Journey.’ The knee-jerk assumption is that something this big demands epic music on the most towering scale yet my gut led me in the opposite direction. While there are definitely some big moments, I would actually describe it as intimate overall. The orchestra seen here is the Macedonia Radio Symphonic Orchestra, conducted beautifully by Oleg Kontradenko in the Macedonian capital of Skopje.

I set up camp in a mixing stage at Sony’s San Diego Studio with the Music team and Randall Lowe from the Santa Monica Studio, where we linked with the orchestra in real-time in Skopje. Meanwhile we were able to Skype together the core development team at thatgamecompany in Los Angeles, in addition to our producer Kellee Santiago who was in Virginia at the time, and producer Robin Hunicke and lead designer Jenova Chen, who were in Shanghai speaking at GDC China! This ended up being a wonderfully 21st century session: a spider web of interconnectedness spanning the globe! In addition to the orchestra, I also had the great pleasure of working with a handful of great soloists, including my dear friend and cello superstar Tina Guo. Their performances brought a vitality to the score that far surpasses the mere notes on the page. And yet for how “high-tech” we were, this music is utterly unconcerned with technology. It is all about emotional meaning. This is part of what makes Journey itself so special. The game has no fluff, no filler. I think of it like a poem.

There is a famous story where Steven Spielberg, after first screening Schindler’s List for his long-time composer John Williams, asked, “so what do you think?” John Williams replied very earnestly, “Steven you need a better composer than me for this film,” to which Spielberg reportedly fired back “Yes, I know, but they’re all dead!” This is basically how I felt about Journey, especially once I got my feet wet and I started to feel that this was no ordinary game. The one advantage I seemed to have was time. By the end I had spent about three years on it. I was able to get around any issues of inspiration through sheer elbow grease, or so I hope. In fact, Journey ended up permeating virtually my whole output during that time. In April 2011, I wrote a miniature cello concerto for Tina (called “Woven Variations,” linked below) that we performed together in Los Angeles. The piece is not really a suite of my music from Journey, but more of an extrapolation. It’s an exploration of the material, taken to entirely different places. This ended up going even further the subsequent summer when I conducted a concert featuring the LA Master Chorale, where I created a single hour-long piece (based on the same ‘Hero’s Journey’ archetype) by stitching together various works in the repertoire and using my Journey music as the glue. Because Journey was still being actively worked on, I would then take the lessons learned from these concerts and apply them to the actual score. A peculiar process emerged from this, where the tangents started informing the core project, as if my career were a table of people all talking back and forth to each other, instead of a normal, forward-moving single file line. I love writing in just about any genre of music you could name, and likewise there are basically no genres of games that I categorically don’t enjoy playing … and yet, if we were in an alternate reality where Journey did not exist and you asked me what my ultimate dream of a game would be (both to score and to play), I suspect I would basically end up describing Journey. Amazingly, we live in a reality in which this game does exist. I feel constantly in awe of what both thatgamecompany and Sony Santa Monica do, and consider it an almost surreal bit of luck to have been part of their … um, journey. You see what I mean???