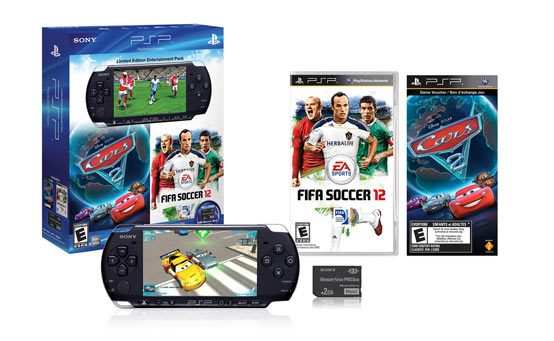 Hey PSP fans! Hope you are geared up for the exciting new releases coming out on PSP! Starting on November 8th you will be able to rev up your engine and join your favorite characters from Disney/Pixar’s, Cars 2 in a high-speed race around the globe in Cars: 2 The Video Game. Also, the soccer season is just about coming to an end but that doesn’t mean the fun has to stop here. We are excited to announce that we are bringing another great PSP Entertainment Pack your way on November 15th that features everyone’s favorite soccer franchise, FIFA Soccer 12 and for the first time ever, Cars 2: The Video Game for PSP.

This bundle features a black PSP-3000, 2GB Memory Stick PRO Duo, a copy of FIFA 2012 on UMD and a PlayStation Network voucher to download Cars 2: The Video Game. Another great value for PSP (PlayStationPortable) system fans to enjoy for only $159.99 (MSRP). Check out the close up below.

As you know, FIFA Soccer 12 delivers a true soccer experience with authentic club and league licenses, and intelligent gameplay that mirrors real-world soccer. You’re able to compete as any one of over 500 officially licensed clubs and experience responsive, intelligent and realistic action. You’ll enjoy turning defenders with sophisticated dribbling and ball control, snapping off precision shots and placing beautifully timed passes with pin point accuracy.

Releasing November 8th, Cars 2: The Video Game lets you jump into the Cars 2 universe with some of your favorite Cars personalities such as Mater, Lightning McQueen, Holley Shiftwell , and the newly introduced Finn McMissile in exotic locations around the globe. You can train to become a world-class spy at the international spy academy, C.H.R.O.M.E. (Command Headquarters for Recon Operations &Motorized Espionage), take on dangerous missions, and compete to become the fastest race car in the world. Use your spy skills in exciting, action-packed combat racing and battle arenas! In addition, you can race against friends and family in either single or multiplayer modes with up to four players in AD Hoc Mode to unlock challenging new tracks, characters, events and thrilling spy missions.

For those of you who already have a PSP system, you’ll be able to jump in on the fun a week earlier as Cars 2: The Video Game will be sold separately starting November 8th for $29.99 (MSRP) on UMD and PSN.

How many of you are planning to take FIFA or Cars 2: The Video Game on the go? We would love to hear from all the PSP fans out there so be sure to share your comments below!