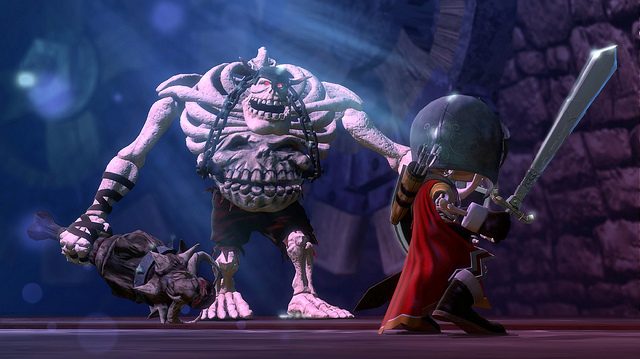 I am excited to announce that Medieval Moves: Deadmund’s Quest has indeed “gone gold” and is ready to ship to stores on November 15th!

Soon after completing Sports Champions for the PS3, our team was hard at work on this exciting new project. Taking what we had learned from creating a “best in breed” motion control game, we further refined the controls for this fun action-adventure game specifically designed for the PlayStation Move.

Story Mode – The evil Sorcerer Morgrimm has invaded Prince Edmund’s Castle and plots to take over the kingdom, raising an army of skeletons from beyond. Now, let the adventure begin as you battle Morgrimm, and his minions, to restore order to the kingdom!

Battle Mode – Play solo, split-screen, or online in three distinct game types. Survive for as long as you can in Invasion, defend the symbol of your kingdom against Morgrimm’s army in Royal Guard, or conjure up minions to attack your opponent in Cauldron Chaos.

Whether you are fighting in one of the large multi stage boss battles in story mode, voice chatting in online competitive matches, striving for supremacy on the leaderboards, or playing as a team in co-op split-screen there is plenty of fun to be had and fun ye shall have!

Thanks to all of our games supporters! We hope you will enjoy the game and ultimately agree that yes, indeed we have done a “GREAT JOB!”