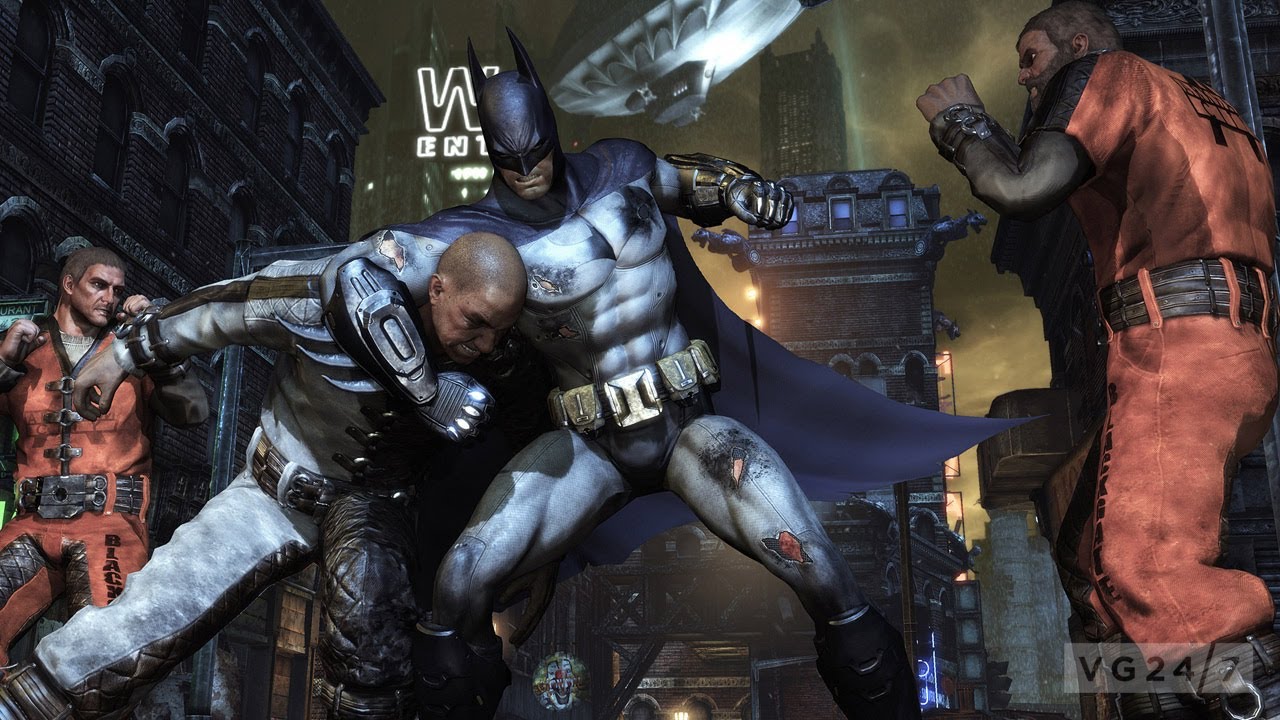 It’s been mere months since I belatedly finished Batman: Arkham Asylum and learned what all the fuss was about. Now, with Arkham City just days away from its October 18th PS3 release, I jumped at a rare chance to speak with Game Director Sefton Hill from Rocksteady Studios. I solicited some of your best questions from Twitter and hopped on the phone with Mr. Hill to discuss a wide range of topics related to one of my most-anticipated games for 2011. Before you dive into the Q&A, get into the spirit by watching the new “Rogue’s Gallery” video below.

PlayStation.Blog: In Arkham Asylum I was able to level up almost all of my skills by the end of the game. Does Arkham City bring more skill upgrades and more skill diversification, perhaps specialized character builds?

We have a number of new gadgets as well, such as the Remote Electrical Charge, called the REC for short. It’s a projectile-taser weapon that you can fire into enemies to stun them or fire at their gun to make it go off and create a distraction. The REC can also power machinery and create magnetic fields that work in some puzzles. Another new gadget is the Freeze Blast technology from Mr. Freeze: it can freeze enemies in place, or you can use it to freeze an enemy’s weapon and take it out of action. Our focus was to give the player as many options as possible.

PSB: What are the biggest refinements you’ve made to Batman’s controls, gameplay mechanics, and overall “feel” since Arkham Asylum?
The biggest thing we’ve focused on is his navigation and his ability to get around Gotham City, making that as exciting and fun as possible. The game is much bigger, a larger expanse but also much more vertical. We worked a lot on the glide system; when you’re gliding you can pull R2 to throw Batman into a dive. And as you hurdle towards the ground you can build momentum to propel you around the city. You can also get a grapple boost upgrade that boosts you off ledges and rooftops. And you can combine these two moves, the dive and grapple boost, to get around Gotham City without even touching the ground, if you get good enough.

What’s really nice is that you have to constantly be evaluating your surroundings like Batman would: where to dive, where to move as you weave through back alleyways and over the tops of buildings. It gives you the feel of being Batman in Gotham City. We wanted to live up to that promise. PSB: Will the Bat Cave be returning in Arkham City, and will it be featured more prominently than it was in Arkham Asylum? (via @PSIPodcast)
I don’t want to give away any spoilers! I can definitely say that we’re focusing on the key Batman elements: you have the action, but obviously the cerebral, the forensic, the psychological, being the world’s greatest detective and so forth. Those are all important elements, and we have them all in Arkham City.

PSB: All the new villains are part of the main quest or from side quest? I fear too many characters and too little time to develop them (via @OverlordZombie)
I think I understand that concern. From our point of view, though, we wanted to make the best story we possibly could. There was never an attempt to squeeze in extra characters for the sake of doing so; we just wanted a really strong Batman story. The story is about this relationship between Batman and the supervillains. Some of the villains are part of the main story, others are part of the side missions. We’ve spent as much time crafting the side missions as we’ve spent on the main story. They are in no way filler, they’re really great entertainment.

PSB: The boss fights are different, right? In Arkham Asylum many were very similar. (via @KevJones311)
In Arkham Asylum I guess we never really thought of the Titan henchmen as boss fights, but as part of the normal combat flow. I can certainly see the concern. When we think about boss fights, we look at the supervillain and how he can challenge Batman.

Take Mr. Freeze. He’s very powerful with his suit, so Batman can’t take him head-on. But Freeze is also super intelligent, so that fight is all about trying to outsmart Freeze. When you find a way past his defenses, when you manage to sneak up and hurt him, he’ll study your behavior and shut down the techniques you’re using. It’s dynamic. If he sees that you’re using the glide kick, he’ll reduce the temperature of the air in the room to freeze up Batman’s cape and stop you from gliding. If you use the floor grates, he’ll freeze them up so you can’t use them. As the fight goes on, the environment dynamically evolves. PSB: How has freeflow hand-to-hand combat been improved since the first game?
We didn’t want to overcomplicate the system. I think its strength is that it focuses on selecting the right move, not long combos or complicated sequences. You really feel like Batman when you play because it’s a very simple, very rewarding combat system. Now the number of options has been expanded massively.

We’ve added a lot of things, like simultaneous counters so that Batman can fend off two, three enemies at once. We added projectile counters, too, so he can throw objects back at enemies. Enemies can use combo attacks now, and you have to pull while countering multiple strikes. You can perform beatdowns, a series of really fast blows that can finish an enemy off without you having to use a takedown. You can even use your gadgets in combos: the Bat claw, the Explosive Gel, REC, even the Freeze Blast. It’s still really easy to pick up and play.

PSB: How much time will the average gamer spend in Detective Mode this time around? (via @TheMarriedGamer)
I understand those concerns. On the flip side, the whole point of the game is to experience what it’s like to be Batman: we didn’t want to reduce his effectiveness or drop a battery life meter on Detective Mode, because that wouldn’t be Batman. So we looked for other ways to solve the issue. We’ve done that by thinking of Detective Mode as being a way for Batman to hunt enemies down; you turn it off to navigate. That balance works well.

PSB: Can we drive the Batmobile or Batplane? (via @mitii5)
We did look at that, those are obviously key elements of the series. But after a lot of thought, we wanted to focus on the feeling of Batman moving through the city, this very vertical city. It’s an inhospitable place: it’s quarantined, it’s got roadblocks in place, so the best way to get around is to glide across the rooftops and through the streets. So that’s what we focused on. When you play, you’ll see why that’s the most effective way to travel.

PSB: I’d like further clarification on the things to expect in the Challenge Rooms. (via @Felix824)
People really enjoyed them last time — it’s a place to develop your combat skills and push them to the maximum. We added this idea of modifiers. There are 12 modifiers in all, and any combination of them can be applied to any challenge room to get a different experience. One example is a a protective aura that moves around the room between different enemies, so you have to pick and choose when to attack. Some of the modifiers are positive, too, such as one that allows you to smash through enemies who hold shields or tasers.

On top of that, we have a campaign mode where you face three challenge rooms in a row. But you start with as many as six modifiers and you have to use them all before you finish all three rooms. You can do them in any order: two in this room, four in the next or however you want. PSB: Will there be any hidden secrets similar to the Arkham City blueprints in Arkham Asylum? (via @RetroDLC)
We love that feeling of the Arkham DNA being throughout the environment in Arkham City. There are going to be lots of secrets and Batman references and Gotham folklore. And the Riddler’s coming back with a vengeance – he’s been plotting his revenge since Arkham Asylum. Throughout Arkham City are 440 different trophies to collect, and each one has its own puzzle. And to raise the stakes, Riddler has taken hostages this time. So if you don’t play his game…

PSB: What are you personally most excited for players to experience in Arkham City?
The thing I’m personally most proud of is how we balanced an open world with the strong, focused story. The feeling that you really are Batman and that feeling of being almost overwhelmed by the sheer number of things that you’ve got to do.

The other thing is just gliding through the city, grappling-boosting off the top of buildings, diving down through alleyways. I can’t tell you how many hours of work we’ve lost to that.