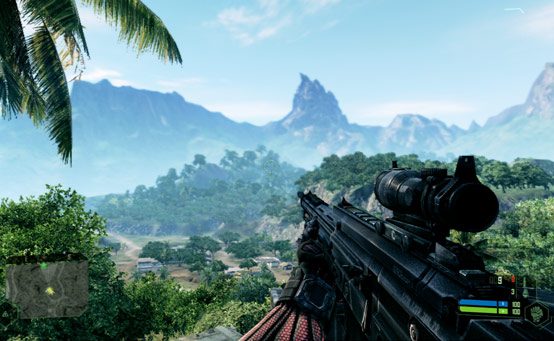 It is very exciting for me to be able to say that the original Crysis is coming to the PS3! Some of you may be wondering how we are going to bring the large open environments that Crysis is known for to console. The expansive jungle sections, the pure white sand beaches, the open vehicle levels… maybe you’re shaking your head that it cannot be done. I’m here to tell you that we’ve accomplished this and you will be able to experience the remastered, single-player campaign for Crysis on October 4th in North America and October 5th in Europe.

So how did we do it? As Egg Shen said, it wasn’t easy! Without the power of the CryENGINE 3, we would never have attempted it, but with fully deferred lighting, a PS3-specific rendering pipeline and SPU-enhanced physics code, together with more efficient memory layouts and more intelligent algorithms, we brought the experience of Crysis to consoles without compromise.

With that said, we didn’t just want to port the game straight onto console; we wanted to make sure we tailored the experience to suit it. We’ve brought the Crysis 2 Nanosuit and controls into the console version of Crysis and we have greatly improved the ease with which players can perform their Nanosuit powered exploits. The Nanosuit gives players options on how they want to play Crysis – from stalking your prey like a stealth predator, to hurling yourself into battle like the Hulk – with the intuitive Crysis 2 controls, nothing gets between the player and the impressive action. We’ve also rebalanced all the combat and weapons to suit the DualShock 3 controller and made improvements to the AI. Also, if you have a 3D capable TV, you can immerse yourself in the beautiful Crysis world with fully integrated stereoscopic 3D support!

For those of you who missed Crysis the first time around, this experience delivers intense, stealth-action and furious battles in large, open jungle environments with jeeps, tanks, boats, helicopters and intelligent AI. If that isn’t enough, you also take the fight to an unknown alien race and board their ships where the laws of physics no longer apply. When you finally emerge, a shocking surprise is awaiting as you discover that the world you once knew has undergone a dramatic alteration.

Crysis comes to PS3 on October 4th in North America for $19.99. On behalf of everyone at Crytek, I really hope that you enjoy playing it as much as we enjoyed developing it!