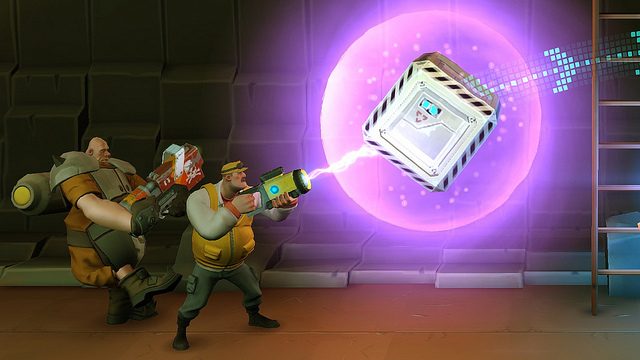 Ever run into a person annoying enough to make you want to launch a two-ton cargo container in their face? Well, it turns out the future is crawling with these guys. And plenty of containers to boot! If you happen to be an astro miner, this means you have a good reason to rev up your trusty G-Lifter for some serious action, now that Rochard appears today on PSN!

So what is a lone astro miner to do against an invading force of Wild Boy thugs? Well, the two-ton cargo containers are just a start. The intruders find themselves on a mined out asteroid, aka home turf, filled with giant machines built to crush, cut and smash things. And then there’s your G-Lifter, which is able to casually grab objects the size of a small car and hurl them across the room. Nifty little upgrades also allow it to fire off deadly lasers and a variety of highly explosive grenade rounds. Add all this to your ability to thrash around gravity with the press of a button, and you can look forward to putting these Wild Boys in a whole new extra-terrestrial world of hurt!

While these and many other gameplay elements seem to blend together seamlessly when you’re out making short work of your opposition in Rochard, most of them started out as far more disconnected features in their early stages. Our previous PlayStation Blog post, Enter the Astro Miner, revealed that our main character John Rochard started out as a guy floating in space, propelling himself using the recoil of his laser gun. The resulting gameplay turned out to be less exciting than we hoped for, so the gun evolved into the G-Lifter, which then became the guideline for all the interaction mechanics in the game.

Once the G-Lifter’s ability to grab and launch objects had been implemented, the sheer fun everyone at Recoil Games had just throwing things around soon led to some creative new prototypes. A basic in-game volleyball court was set up, allowing two players to serve and smash giant cargo crates towards each other. More than just a funny game for lunch breaks, the time spent catching and shooting objects eventually lead to countless improvements in the handling of the G-Lifter. These opened up the ability to grab and launch consecutive objects in mid-air, allowing players to string together such “G-Lifter combos”. It turned out this had a very big impact for high-skill players, as a sequence of well-placed objects now allowed them to literally fly through sections of a level, without even touching the ground. And rest assured, we left all that in the game for you to get insanely good at!

As the last few months saw the game creep ever closer to its final form, a steadily increasing number of people from outside of the studio were given a chance to play it. Their gaze firmly directed towards the large screen on which they had just taken the role of John Rochard, the journalists and visitors often remained oblivious to the dozens of eyes carefully observing them from the surrounding office spaces. The looks expressed both excitement and concern about the reception of the team’s hard work, as everyone tried to interpret the body language and facial expressions of the person that just entered our carefully crafted adventure. But the response was more than we could have hoped for. No questions about how to handle a G-lifter or low gravity environments. No frowning at repeated deaths or requests for assistance in confusing challenges. Nothing but a silent focus and a determined grin, insisting on making it through the challenge in each consecutive room.

Time and again, people sat down in our office for a solid 6 to 8 hour play through, often forsaking their lunch or even a toilet break in order to finish the game. Soaring through the air in low-G, launching heavy crates at unsuspecting enemies, inverting gravity at will and blowing up large chunks of the scenery with explosives and mining lasers became second nature the instant a big smirk revealed they had just discovered a new trick. Even after repeatedly dissecting and rebuilding each minute detail over the past years, the experience still proved to be as intuitive and captivating as our concept set out to be.

So lo and behold here we are, proud to present Rochard, our game. The past month already saw the game receiving several awards and glowing reviews, lauding its gameplay, flow and style. More than ever there is reason for us to look forward to its reception by our most esteemed critics. You– the Gamer.

So download the game or the demo later today and let us know what you think! We want to hear from you!