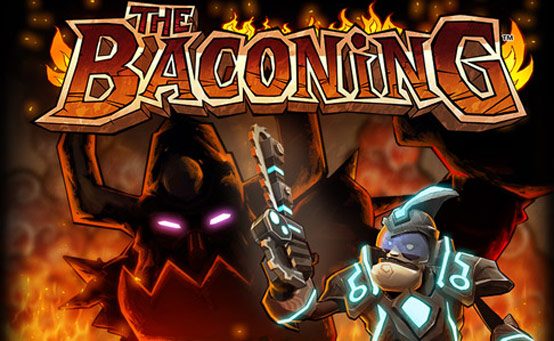 I’m wicked excited to share some details about our new game, The Baconing, DeathSpank’s greatest and most delicious adventure EVER! The game will be available to download today from PlayStation Network. The Baconing is part of the PSN PLAY promotion so if you purchase the game before September 19th you will also receive co-op character DLC, Roesha – One Bad Mutha. Also, if you are PlayStation Plus subscriber, you can still get 20% off the full game price!

When we started developing The Baconing we didn’t want gamers to feel like they HAD to play through the previous DeathSpank games before taking on The Baconing. We decided to make this game accessible for anyone to jump straight into, ensuring that new players and returning fans alike can both equally enjoy this game. Those familiar with DeathSpank will certainly experience just as much familiar fun plus a bucket-load of improvements too.

This is, by far, the funniest DeathSpank to date. We had an absolute blast making it, and it was an unwritten rule that we needed to laugh every day while working on the game. We added our comedic touch which was brought to life brilliantly by some incredible voice acting.

The world and characters we have created for this game are, let’s say….colorful to say the least! Mix this with some of our favorite, familiar sci-fi themes and references — from Tron to Mad Max to The Jetsons — and you’ve got a porky recipe for hilarity.

It just wouldn’t be a DeathSpank game without a new co-op sidekick for a friend, co-worker, lover, spouse, stranger-on-your-couch, or all of the above to help vanquish the hordes of evil. And have we got a guy for you: Meet Bob from Marketing! He’s a hammerhead shark in a business suit with an ferocious appetite for justice and leveraging a target market!

Bob wields a swordfish to poke holes in bad guys, shoots lasers from his eyes, devours enemies for health (he doesn’t care if they’re dead or alive), and can stealthily swim underground to take enemies by surprise. All in all, an incredibly deadly sidekick.

And one of the best things about Bob is that he was a suggestion from one of our fans. What better way to show we listen, than to create something in the game they suggested. We love our fans!
The Baconing is a game Hothead is incredibly proud of, because we created the entire adventure ourselves. Every mechanic was reviewed, and nothing was off limits when we looked at revamping many of the game systems. If it didn’t fit properly, we cut it. If it worked already, we improved it. If it was frustrating, we streamlined it. If it was edible, we ate it. You get the picture. And we’re certain everyone will be pleased with the results.

So before you rush of and download it, enjoy our sizzling launch trailer for The Baconing above.