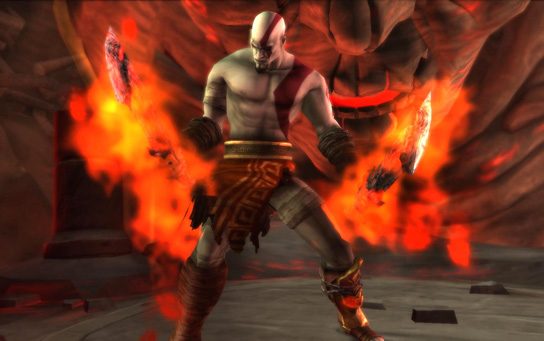 Re-mastering both of the God of War PSP games in full HD for the PS3 God of War: Origins Collection definitely had its share of challenges for us. The first goal we had was simply the daunting task of up-rezing the engine and content authored on a PSP running at 480 x 272 resolution and 30 frames per second to 1920 x 1080p at a steady 60 fps on the PS3. This required a custom PS3 version of our engine, coded in-house exclusively for the Origins Collection, as well as a painstaking process by art team. We ended up going through every single character in the game and doubling or tripling polygon count by hand, as well as up-rezing and re-painting every texture across both games at 4x resolution on both characters and environments.

Being gluttons for punishment, we also decided from the beginning of the project that just re-mastering content from PSP resolution to 1080p wasn’t necessarily challenging enough (as a quick aside…we were wrong), so we also wanted to take advantage of our custom PS3 engine and try to implement full stereoscopic 3D support. After a first pass of 3D implementation and careful playthroughs of both games in 3D, we identified certain trouble areas with and addressed them with techniques such as near-screen fading on certain particles and camera focal plane compensation for a smooth and enjoyable 3D experience. The quality of the final result of the 3D on the Origins Collection so surprised us that it actually sold myself and a number of others on the team 3D TVs in general. Personally I wouldn’t want to play the games any other way after being able to experience it firsthand.

Besides adding upscaling in-game content and 3S support, there was one other challenge that is worth noting (and elicited groans of despair from both artists and programmers alike). Between Chains of Olympus and Ghost of Sparta we had over an hour of pre-rendered cinematics, and the gap in video resolution between our PSP source footage and full HD was so extreme that no matter how many custom video up-scale solutions we tried, there was just a glaring quality difference between the 1080P real-time gameplay and the video. It was pretty demoralizing for us to play the game in beautiful HD and hit a cinematic trigger where Kratos looked like he was rendered through a dirty sock, so we realized we would just have to bite the bullet and properly re-render all cinematics in full 1080p. To do this we ported all of our cinematic scenes to the PS3 and, months and terabytes of data later, had every single frame re-rendered in HD through the new Origin Collection’s engine. From there we had to up-rez all of the post production effects and re-composite every single cinematic again in HD, giving us a final result that blended seamlessly with the in-game quality.

Needless to say, all of the above made for quite a laborious process for us, but we were set on doing justice to the original games that we put so much blood, sweat, and tears into. We hope this effort really pays off for God of War fans able to experience both PSP games in glorious 1080p!