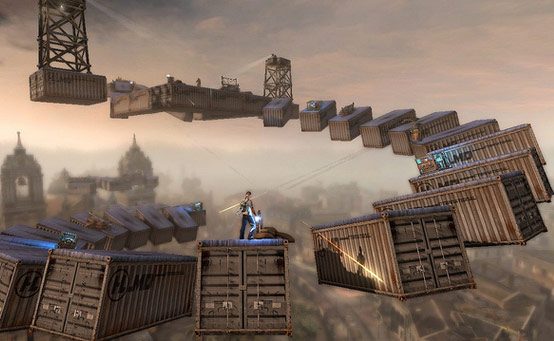 Since the launch of inFAMOUS 2 there have been over 50,000 UGC missions submitted, 4.8 million UGC missions have been played totaling over 300,000 hours spent in those missions. A new UGC mission is added at a rate of one per minute and two UGC missions are started every second! Check out the map below and you can see where missions are being added in New Marais.

Speaking for the staff of Sucker Punch Productions, we’ve been astonished by the creativity and variety of your creations! We want to spotlight a couple of the missions that have really impressed us, all of which can be found on the Sucker Punch Featured list in-game.

UGC veteran CJon’s “The Cage” pits Cole into a vicious cage match! Step into the octagon as Cole fights against Swamp Monster and his underlings for his freedom, and watch as the crowd cheers for a winner (hopefully it’s Cole!).

In RetroSteveUK’s “Invaders from Space,” Militia grenadiers seek to protect their landing invaders and it’s up to Cole to protect New Marais. Recreating retro-style games with UGC tools has always been a fan favorite — just ask LittleBigPlanet fans! — and now inFAMOUS 2 fans are joining in on the arcade fun.

Billysan291’s “Lost Temple of the Fire Stone” plunges deep into ancient passages and tasks players to hunt for hidden treasure. Built around parkour, this UGC level has Cole doing his best impression of our favorite treasure hunter from the 80s. Don’t tell Nathan Drake!

SolidSnake1776’s “Sky Fort” is a battle up a twisted path to the Militia’s floating base. Platforming and battle blend together to create a fun and challenging mission that takes place in the skies high above New Marais.

TheDragonmind’s “Hand-Crafted Boss Battle” is one level that instantly caught our attention. You’ll fight a huge four-story robot — hand-built by TheDragonmind — while dodging cars attempting to avoid being stomped on. Cole has to scale this mechanical beast in a fashion reminiscent of the crazy ascents in Shadow of the Colossus. This is one level that really shows off what you can do with inFAMOUS 2’s UGC tools and makes us thrilled about the possibilities that will come in time.

Be sure to head over to infamousthegame.com and add some of the missions listed above to your queue, and explore the thousands of other UGC missions in inFAMOUS 2. For the latest news, check out infamousthegame.com,the official PlayStation.Blog, follow us on Twitter @SuckerPunchProd, or visit our Facebook page.