The House of the Dead: OVERKILL Extended Cut – Hunt Mutants With PlayStation Move in 3D 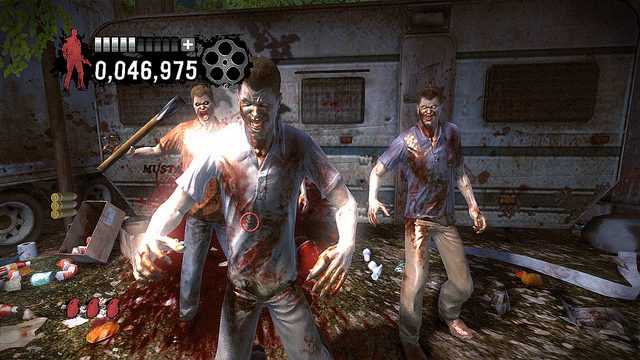 We barely escaped a horde of flesh-hungry mutants to bring you this PlayStation.Blog exclusive! *panting* But today we are proud to reveal the box art for The House of the Dead: OVERKILL – Extended Cut, the latest b-movie blood fest from SEGA and Headstrong Games.

We announced The House of the Dead: OVERKILL – Extended Cut just before E3 this year, and were amazed to see that there were so many who were eager to take aim at the mutant infection springing up in Bayou County. This is the first time we have released The House of the Dead on an HD console, and we feel that the PS3 is the perfect home for an arcade-style shooter like OVERKILL. With 3D and PlayStation Move support, two brand new scenarios added, and all seven stages of the original remastered, the ‘baddest’ just got bigger! We are really working hard to make this the best in the series to date.

These posters and our box art pay homage to our signature retro b-movie look, and hopefully you recognized the legendary Agent G and Detective Washington. This time around, we also wanted to give Varla Gunns a bit more top billing, so she became the headline character on the box art. This is no fluke however, she plays a bigger part in this Extended Cut and we’ll have more details on this soon. Exclusively for you PS blog followers, we are also releasing some fresh screenshots and the fact sheet detailing all the new features of The House of the Dead: OVERKILL – Extended Cut.

The House of the Dead: OVERKILL – Extended Cut will be releasing exclusively on PlayStation 3, and will be available in stores across North America on October 25, 2011. We will be revealing more details in the near future so keep it tuned to the PlayStation Blog and our official game page. You can also keep up with SEGA via Facebook and Twitter.