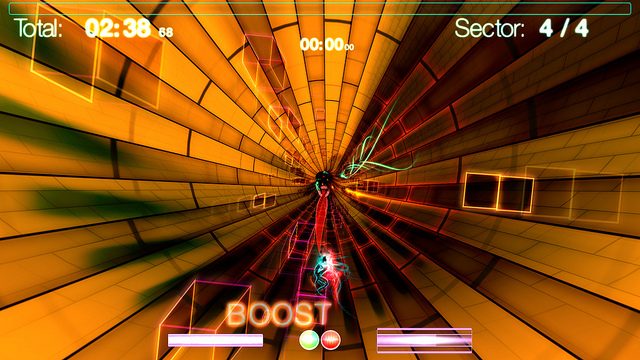 I am very excited to be introducing ][ Game‘s first PlayStation Network game: Dyad.

Dyad is an abstract racing game that has influences in many genres including racing games, fighting games, puzzle games and classic arcade shooters.

Dyad does away with the traditional racing game mechanics of break and accelerate and replaces them with puzzle-like mechanics. You must interact with your enemies in unique and varying ways in order to gain speed.

I’ve always loved the visceral feel racing games provided, especially the WipeOut series, and I wanted to translate that feeling into a puzzle game. In most racing games, each track has an ideal ‘racing line’ which players must memorize and translate into muscle memory in order to be successful – I remember months of repeating tracks in WipeOut XL for the PSX! With Dyad I replaced the mental process of memorizing a racing line with various combo mechanics. Dyad begins with very basic comboing rules centred around the polarity of enemies, and continuously adds new mechanics throughout the course of the game. You race quickly in Dyad by making smart decisions, not by memorizing static tracks.

While discussing the contrasting differences in the mechanics in Dyad versus traditional racing games, we found a very strong correlation between the mental process of playing and learning Dyad to meditation. Dyad subtly plays off the meditation theme in order to aid you, and maybe get you thinking about new and different things you wouldn’t expect from a game. Without giving away too much, you’re also on a quest in Dyad… similar to the quest a particle might take in the Large Hadron Collider.

I really wanted Dyad to be something anyone could enjoy; by “anyone” I mean literally “anyone,” not “anyone” in the context of casual games. Dyad is a very deep hardcore racing/puzzle game, but it’s designed to be enjoyed at many levels. The audio and visuals were designed to be appealing both actively and passively. I’ve shown Dyad at several public gaming and non-gaming events and people will stand around watching and listening without any idea what they’re seeing. New players and casual players get a lot out of the unique, intuitive mechanics, and hardcore players can really dive in to maximize their performance.

We’ve been hard at work on Dyad for the past 3 years and I’m very happy with it, and it will only get better as it gets closer to completion. Dyad runs at 60fps at 1080p on the PlayStation 3. Thanks for checking it out! I’ll post again on the PlayStation blog when we’re ready to release.