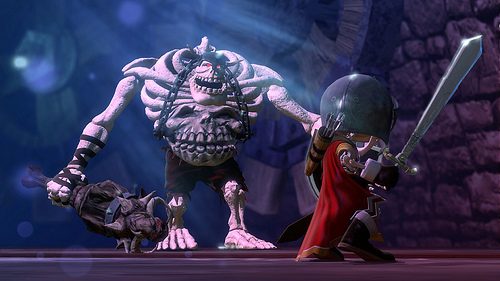 Jeremy here live from E3. Last night at our press conference in LA, we revealed Medieval Moves: Deadmund’s Quest, a brand new game title for PlayStation Move from Zindagi Games and San Diego Studio, the same team that brought you the best selling Move title, Sports Champions. So you know you can expect best in breed motion controls with an emphasis on fun gameplay. Medieval Moves is the first action adventure game that uses a unique set of motion controls to seamlessly transition between throwing stars, sword fighting and archery for an intuitive and immersive gameplay experience.

The story behind Medieval Moves involves the evil Sorcerer Morgrimm who has invaded Prince Edmund’s Castle and plots to take over the kingdom, raising an army of skeletons from beyond. While trying to stop Morgrimm, our hero, Prince Edmund is also turned into a skeleton! Now named “Deadmund”, he must fight to save his homeland and defeat Morgrimm and his minions to restore order to the kingdom.

You control your character’s actions with the Move controller with a slash of the sword, shooting an arrow, or flinging throwing stars and much more. There is no cumbersome inventory system or weapon selection screen, you do the action and it just works. For example with an enemy in your face, the sword and shield are perfect. Swing your arms to swing the sword and hold the Move button to position your shield. If you see a distant enemy, reach back for an arrow from your quiver for pinpoint accuracy. Sometimes quantity counts, so grab a throwing star or three with the T button and let them fly as fast as you can throw.

This is only the start, there is so much more to be found in Medieval Moves! This Fall you will be able to face off against a relentless army of skeletons and experience an all new action adventure with your PlayStation Move! Stay tuned for more information in the weeks and months ahead.