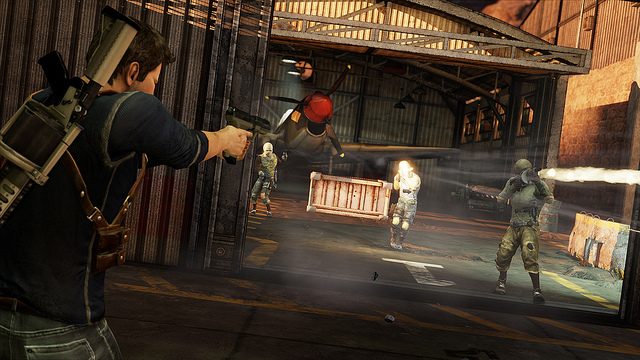 By now you’ve probably read the full details of what you’ll get with UNCHARTED 3’s upcoming multiplayer beta. Now, in our new video interview, Naughty Dog’s top developers reveal just how deep this rabbit hole goes. At a glance, UNCHARTED 3’s most obvious multiplayer enhancement lies in its sweeping character customization options in the form of weapon loadouts, gun mods and a wide selection of ability-enhancing Boosters. You’ll be able to modify your character’s appearance in almost every way, whether you want to slap some aviators on Nathan Drake or cobble together a custom hero or villain from scratch. “There are hundreds and hundreds of parts and every part has a customizable color,” Game Director Justin Richmond tells us. “You can look the way you want to look. We want it to feel personal.”

“Personal” is a theme that permeates every yawning nook and cavernous cranny of UNCHARTED 3’s redesigned multiplayer experience. Underneath the ultra-polished shooting mechanics and well-balanced arsenal of weapons lies a social media platform that is positively thrumming with potential. With UNCHARTED 3, community is finally a two-way street: You can tap into your Facebook friend list to recruit a Buddy, then fight by his side while earning rewards for coordinated kills — with a bonus for landing the obligatory post-kill high-five. Afterwards, you can upload your favorite video clips to Facebook and YouTube for sharing. Or, if you prefer, you can watch streaming community clips via UNCHARTED TV while you wait for the next match to begin.

You’ll get your hands on UNCHARTED 3’s new multiplayer modes when the beta begins on June 28th for PlayStation Plus subscribers and owners of specially marked copies of inFAMOUS 2; full access follows on July 5th for all PSN users. Watch the video and read on for more excerpts from our interview with Game Director Justin Richmond and Game Designer Roger Cogburn. And chime in with any questions in the comments!

“We’ve been running The Lab sessions for UNCHARTED 2,” UNCHARTED 3 Game Director Justin Richmond explained, “and we used that feedback to help design UNCHARTED 3.” With The Lab, Naughty Dog’s designers experimented with new modes using UNCHARTED 2’s sizeable multiplayer audience. “Plunder Pistols ended up being super popular,” Richmond said, “We knew it was fun internally, but being able to test it with the fans in The Lab verified that we thought was cool. We want to do even more of that with UNCHARTED 3. We have the ability to get feedback from the fans, and we want to maintain that dialog.”

“There are a number of ways to implement 3D; some are more ‘fake’ than others,” Richmond explained. “We committed to using 3D early on, and we wanted to do it as real as possible because it allowed for splitscreen. 3D and splitscreen are kind of the same thing because the game is basically rendering each frame twice. As soon as we figured out how to do that with 3D, we knew we could handle splitscreen. Now, I am grossly oversimplifying that — the programmers would kill me for saying it was that easy! But basically, our 3D implementation allowed for splitscreen support.”

UNCHARTED 3’s splitscreen multiplayer enables dual PSN logins.
“You don’t have to be on some guest account,” Richmond said. “You and your friend can sit down in splitscreen and level up both of your characters. We support two different PSN ID logins.”

The dynamic multiplayer events were inspired by UNCHARTED 2.

“UNCHARTED 2’s Trainwreck multiplayer level that had an event where a cargo train fell down and revealed an RPG,” Game Designer Robert Cogburn explained. “We were surprised by how that resonated with people, so with UNCHARTED 3 we decided to swing for the fences and go as epic as we can.” Every level includes some sort of dynamic event: Airstrip’s opening truck chase ends in a finale at the airport; Chateau’s spreading fire slowly consumes the central floor and reveals a new area and weapons.

Fallen foes will occasionally drop randomized Treasures, and you’ll want to collect every piece you find. “The Treasures add a bit of an RPG element,” Cogburn said. “Every Treasure piece has a varying level of scarcity, and they fit into sets. Once a set is fully completed, you’ll earn an item: a gun, a custom part, an emblem, and so on.” What’s more, if you’re battling with a buddy, he or she can run over and grab Treasure for you. “We can update the Treasures dynamically, too,” Cogburn teased, “so we can add more later if we want to.”

You’re no longer helpless while climbing.

Back in UNCHARTED 2’s multiplayer, climbing left you high and dry — especially if you encountered another enemy. “It came down to who could hit the ground first and get his gun out,” Richmond said. “It kind of sucked — you could only climb or drop down.” Not so with UNCHARTED 3. “Now it’s more like a chess match. Should I edge over and try to kick him? Should I drop? Should I climb? If I do, will the other guy pull me down? It adds an extra dimension to the combat.”

Plenty of games enable you to capture multiplayer footage and show it to your friends, but UNCHARTED 3 is transforming its multiplayer component into a full-blown video publishing platform. “We can not only upload your video clips to YouTube and Facebook, we can stream videos into the engine,” Richmond said. That means you’ll be able to watch Clips of the Week and community clips while you wait for that next multiplayer level to start. “And we will constantly update that content,” Richmond promised.

UNCHARTED 3 will give high-level players much, much more do.

“With UNCHARTED 2, high-level players would hit a point where they didn’t have anything to spend money on,” Cogburn said. “UNCHARTED 3 is much deeper.” Boosters, which enhance player abilities, can now be leveled up with use. And if the competition gets really tough, you can even buy pricey-but-potent Paid Boosters to temporarily even the odds. “The ranking system plays into that because the higher your rank, the more Paid Boosters will appear. It’s a far more interesting ranking system than in UNCHARTED 2.”