Portal 2: Pretty Much Every PS3 Question Answered (and that Cake thing, too) 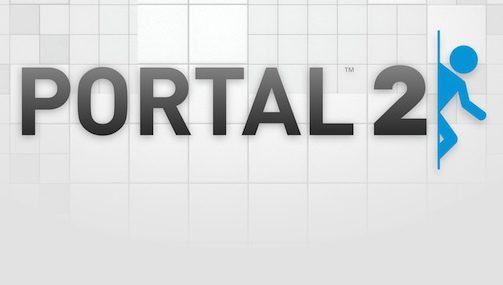 Valve Software has repeatedly described Portal 2 for the PS3 as being “the best console version of the game.” And for good reason, given that you’ll get a free PC or Mac version of Portal 2 along with your PS3 copy, as well as exclusive cross-platform PS3-to-PC co-op gameplay and voice chat, Steamworks features and much more. Good stuff!

Not long ago, we asked you to submit your very best PS3 Portal 2 questions. We wanted every nerdy, detail-obsessed question possible and, as we’ve come to learn, PS3 fans never disappoint. Last week, we finally cornered Portal 2’s Project Lead Joshua Weier and Writer Erik Wolpaw in a bare concrete room under harsh florescent lighting. We slapped a thick stack of your questions on the table, cracked our knuckles, and extracted the answers via a combination of brow beating, idle threats, and good old-fashioned seduction.

Actually, we just called them on the phone and goofed off for an hour or so. It went something like this:

Jeff Rubenstein, PlayStation.Blog: I’m one of the people who played Portal via The Orange Box on PS3, and I’m told it wasn’t the best version of the game. Why not?

Joshua Weier, Valve Software: We learned a lot from The Orange Box, which was ported to the PS3 by an external group. This time, we developed it in-house at Valve and made it a full-fledged PS3 title. At the time of The Orange Box, we just didn’t have any internal PS3 knowledge at the company. As we worked on Portal 2, two things happened. One was that PlayStation had a very open stance on their platform and they were willing to do a lot of work with us to make Steamworks on the PS3 a reality. And Steamworks is a huge thing for Portal 2 and for Valve in general, so that really made us want to work with PlayStation.

The second thing is, as we’ve grown the company internally, we’ve hired people who have experience at great studios such as Naughty Dog and who have a lot of experience on the PS3. They were able to look at our engine and make the required tweaks to make sure Portal 2 works really well with the PS3.

Jeff, PSB: Steam and PS3: Two great tastes that taste great together? Tell us how you’re getting your chocolate in our peanut butter.

Joshua, Valve: We wanted to make sure that if you’re a Steam user, the PS3 experience is very familiar to you. When you’re playing the game on the PS3, you press the Select button to bring up the Steam overlay — that’s very similar to the PC and Mac version. From there, you can see your Steam friends, text chat, and invite them into Portal 2. And we also have Steam Cloud, which works the same way as it does on the PC or Mac, where your games are backed up to the Steam Cloud automatically via your Steam account. If you delete them or move to another PS3, they will be restored.

And this time around, you can actually play with your PC and Mac friends on your PS3, which is a pretty big deal. They show up as any old friend on your Steam friends list — you don’t even need to know whether they’re on a Mac or PC. You’re playing the same content, the game works the same way…it’s super-seamless for everyone. We’re all about giving gamers choices. Being able to hop into the game, find a buddy, and not care what platform he’s playing on is a pretty cool thing.

Jeff, PSB: You will need to sign up for a Steam account to take advantage of that, yes?

Joshua, Valve: If you want to take advantage of that, yes. We don’t require that you sign up if you want to use simple matchmaking or to play with your PS3 friends.

Sid, PSB: Given the Steamworks functionality, will the PS3 version be getting the same updates at the same time as the PC and Mac versions?

Joshua, Valve: It’s our goal that, as we update the PC or PS3 version, we keep them all in lockstep. Especially because we have co-op gameplay between both platforms. Not all of the PC updates we do will matter for the PS3 — there might be a videocard-specific update on the PC, or a PS3-specific tweak. But as far as content goes, we want to keep them in lockstep.

Sid, PSB: Another reader question: If a user gets Portal 2 for the PS3, can two people play that copy at the same time? One on the PS3 and one on the PC?

Joshua, Valve: Well, of course you can play two-player splitscreen on one PS3. But otherwise, it works the way Steam play does now — you can only be logged into one device at a time.

Sid, PSB: Obviously the PS3 version will have Trophies. Will Trophies be synchronized between both the PC/Mac and PS3 versions?

Joshua, Valve: For your Steam account, we have Steam Achievements that mirror the Trophies and those are always up to date between the PC and PS3. That does not include Trophies, however. Trophies have to be unlocked on the PS3.

Sid, PSB: A lot of PS3 owners have pre-ordered Portal 2. Will their pre-order bonuses apply to both the PC/Mac version and the PS3 version?

Joshua, Valve: Yes. We combine that into your Steam account and that will show up wherever you’re playing.

Sid, PSB: Any chance for supporting a USB mouse and keyboard control scheme?

Joshua, Valve: No, unfortunately we don’t do that. The whole game is built around playtesting, which extends to the hardware and how people use it. We have people internally who played on the PS3 — we use it all the time — and we constantly iterated it. Luckily, Portal 2’s not a super twitchy, complicated game, so we just focused on making a comfortable controller experience.

Sid, PSB: Does Portal 2 on PS3 require a hard drive install? How much space does it take up?

Joshua, Valve: We do not require users to install to the hard drive [note: there’s no hard drive install at all], but you’ll need 22 MB for saved games.

Sid, PSB: If the Steamworks system and Portal 2 are well received by the PS3 community, do you see any opportunity or chance of re-releasing older Valve titles through that framework onto the PS3?

Joshua, Valve: You know, we’ll see. If customers are super excited and there seems to be an opportunity there, we’re always interested in looking at that kind of thing. Right now, we’re just waiting to see how everyone responds.

Sid, PSB: On that note, are you thinking about DLC for Portal 2 in general?

Erik Wolpaw, Valve: We’re definitely thinking about DLC. I believe we’ll be talking about some of those details soon. We are doing DLC, we just haven’t released the details yet.

Sid, PSB: Tell me about the split-screen support for the PS3. How has it been implemented?

Joshua, Valve: It’s pretty straightforward. If you start a co-op game, you have the option of doing it remotely with another PS3 or PC/Mac, or you can do local splitscreen. Splitscreen is a really fun way to play Portal 2, actually, because the co-op is all about communication. Having the person right next to you on the couch makes it much easier to give them a high-five.

Joshua, Valve: It’s not drop-in, drop-out because you can’t play the co-op game by yourself due to the way the puzzles are structured in the co-op mode — you’ll always need two players. You can invite whoever you want into your game, and then the game figures out where you both are in your game progress based on what the two of you have done. It’s probably best to play with one friend, as you’ll learn together and build a rapport, but it’s not necessary.

Sid, PSB: A common question: Will the PS3 version have a smooth framerate and look great?

Joshua, Valve: Oh yeah. We’ve done a lot of work to make sure that’s the case.

Sid, PSB: Let’s settle this once and for all: there’s no PlayStation Move support in Portal 2, right

Erik, Valve: There is no Move support.

Sid, PSB: What is your favorite feature in Portal 2 that didn’t make it into Portal?

Erik, Valve: Co-op is the biggest one. It’s just a huge game changer — it makes you re-think the way you solve puzzles with portals. It’s a whole different experience in co-op.

Jeff, PSB: I’m trying to wrap my head around having another set of portals in co-op… what are you doing to make sure I’m not punching my partner rather than high-fiving them?

Erik, Valve: The puzzles are a little bit more complex in co-op, but you’ve also got a second brain to work with you on those puzzles. Playtesting is the cornerstone of Valve’s development philosophy — we playtest early and often. Two people looking at a puzzle can make a difficult thing a lot, lot easier. And we train you; the game is a gradual progression in terms of puzzles. By the end of the game, you’re doing things that would have seemed really daunting at the beginning of the game.

Sid, PSB: Another popular question from our readers: Is Portal 2 a longer, beefier game than the original Portal?

Erik, Valve: It’s definitely a more elaborate story in terms of what happens from beginning to end. I don’t think you’ll be disappointed by the amount of story that’s in the game.

Jeff, PSB: I hate to get into the cake thing…but were you guys taken aback or surprised by how persistent a meme the “cake is a lie” thing became?

Erik, Valve: Yeah, it was a shock. But I assume that’s probably always the way it is, you know? It’s really hard to manufacture a meme and have it catch on. It probably always comes as a shock to whoever had a hand in making it.

Jeff, PSB: Was there a moment in Portal 2 where you thought, “I wonder if this is going to stick like the cake meme?”

Erik, Valve: Usually in a joking sense. You pick the dumbest thing possible you just wrote and you say, “this is it, this is the one!” But at no point did we seriously consider it. Process-wise, you stick with what works. At no point in our process is “thinking up the meme” part of the process. It either happens or it doesn’t. You do the thing you always do and hope for the best. Most things come out and there’s no meme, so it’s very possible there’s no meme here. Hopefully you’re just entertained for eight or nine solid hours.

Erik, Valve: Well, it’s not like we’re angry about it! It’s flattering that people latched onto it like that. It’s more that we figure everyone else is most likely sick of it. Internally, we thought, “if we go back to that cake well, people are going to be livid!” Actually, I don’t know if they’d be mad — they’d probably be sad. It’d be so pathetic, you know?

Sid, PSB: So will you be moving on to other pastries in Portal 2?

Erik, Valve: Well, that would be a spoiler. Actually, I’m going to spoil it — no! No, no, no. None of it! The cake has been retired, it’s gone. Well, kind of. I think some geeky artist might have buried a cake reference in there somewhere, but it’s buried deep. You don’t have to worry about it.