inFAMOUS 2: The Quest for Power 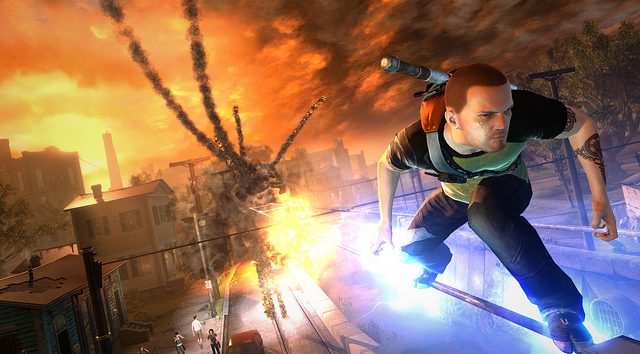 Today I’m here to talk about everyone’s favorite topic: powers! More specifically, how does Cole manage to improve on is already impressive set of electrical abilities?

For those of you who don’t know the original inFAMOUS story, Cole’s electrical powers appear when he’s caught in the blast of a mysterious device called the Ray Sphere. Cole gains more and more abilities, becomes more and more powerful, and survives the gauntlet of Empire City… but he also is given a glimpse into his future. He realizes that even at the height of his powers, he is no match for the challenge that awaits. A battle with a great Beast looms, and Cole isn’t ready to face it.

So in inFAMOUS 2, Cole travels South to New Marais to trace a path to the man behind the Ray Sphere technology, Dr. Sebastian Wolfe. With buddy Zeke riding shotgun, they set off to find the key to the next step in Cole’s evolution and a new level of power– powers that will be necessary if Cole hopes to survive the upcoming battle.

When Cole and Zeke eventually track down Dr. Wolfe, he explains that over years of experimenting, he had isolated the specific type of energy responsible for all genetic mutations. Dr. Wolfe’s technology—like the Ray Sphere—was all created to concentrate and manipulate this energy. To most people a dose of this mutative energy is fatal—but for a small fraction, the energy unlocks their untapped potential. These rare individuals are called Conduits, and of course Cole is one of them.

Wolfe has also developed a device—called a Blast Core—which can store this type of energy safely for an extended period of time… Over the years, he’s built and charged six of these Blast Cores. So to continue his evolution, Cole will need to locate these all-important Blast Cores, and absorb their energy into his body. But Wolfe fears the Blast Cores will fall into the wrong hands, so he has moved them to safe locations around the city — and Cole will have to hunt them all down.

Of course our story will take some important twists and turns along the way, we’ll meet other Conduits, and as in the original inFAMOUS game, your choices about what kind of person you are. But no matter which path Cole follows, one thing remains the same: without the Blast Cores he won’t survive.