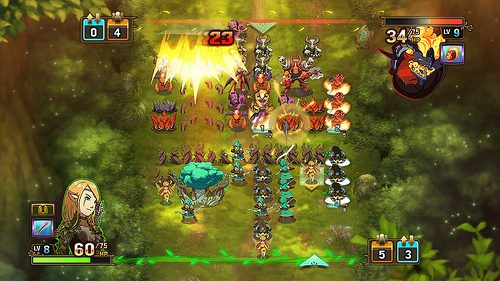 As you in-the-know PSN bloggers realize, Might & Magic: Clash of Heroes is our HD love letter to the original game that we released in 2009 to acclaim and awards. It’s not often that you get the chance to remake your own game, so we couldn’t pass up the opportunity to bring this gem to a whole new audience: you guys! By now most people know about Clash of Heroes’ engrossing campaign mode, its innovative puzzle-strategy gameplay, and its tense turn-based battles. But what few realize is that those battles are even better when your facing off against your friends (or some random stranger who has an ass-whupping coming to him). So that’s why Might & Magic Clash of Heroes is dropping with full local and online multiplayer, in either 1v1 or 2v2 flavours. Not content to simply juice up the multiplayer mode and port the game over, we decided to redo the game from scratch with all new 2D HD art, hand-drawn by the same talented crew of artists that brought you the lush visuals of Critter Crunch. Puuuurtyyy!

Now you’re up to speed on why Clash is jumping from handheld to console, but what’s it actually about? There’s two core components to Might & Magic Clash of Heroes: Battles and Adventure. Let’s take a bit of time to dive into each one. And what better way to do this than through a special video made just for PlayStation.Blog readers…

Battle gameplay is the heart and soul of the Clash of Heroes experience, combining turn-based strategy and puzzle gaming. In Clash of Heroes, you can grab units from the end of each column, and place them at the back of any new column – just like how you moved critters around with Biggs’ tongue in Critter Crunch! Go on the offensive by matching three of the same units vertically, or build defensive walls by matching three (or more) of the same units horizontally. That’s the meat of the battle system, but trust me, there’s tons of gravy. Rarer and more powerful units get added to the mix, bringing with them special attacks and abilities. Also in your magical toolbox of magic are Hero Spells, your hero’s special attacks that have different attributes, and when triggered at strategic times, can turn the tide of a battle.

Clash of Heroes may have puzzle roots, but players will need to start thinking ahead, watching their opponents, and formulating a strategy if they hope to stay alive on the battlefield–all while keeping their puzzle-y eyes sharpened for potential combos!

Battle may be the guts of Clash of Heroes, but it’s got some mean adventuring as well.

Clash of Heroes takes place across the varied lands of Ashan, and over the course of five campaigns, you’ll take five distinct young characters and mold them into heroes through the heat of battle. Lots of battles! While adventuring, you’ll meet tons of kooky characters, find chests full of loot and wind up facing off against enemies of all kinds, leveling up your hero in the process. You can power through the game’s main quests, or choose to stop along the way to take optional side-quests, or make some extra coin bounty hunting, or even solve some Critter Crunch-style puzzle-mode battles!

Well, that’s enough blabbering for one post. In case you can’t tell, we at Capy are ultra-excited to unleash Clash of Heroes, and hopefully we’ll be back again soon to continue yelling at you over the internet about how proud we are of the game.