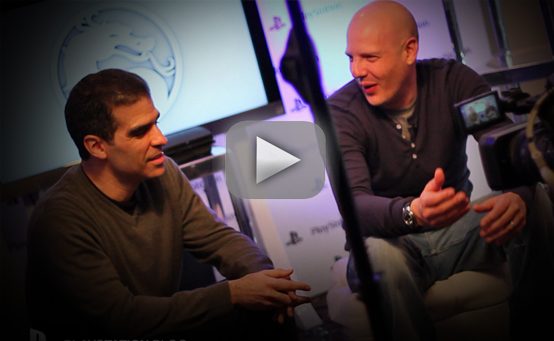 “The first time we saw him we thought, ‘Oh my God, what a great Mortal Kombat character he would make.’”

Ed Boon is very excited. The Mortal Kombat creative director and co-creator can finally spill his guts regarding one of the most anticipated video-game crossovers of all time: Kratos’ exclusive guest appearance in the PS3 version of Mortal Kombat. “We kind of felt it was meant to happen,” he says. “We think we’ve done Kratos justice.”

Ed Boon and God of War III director Stig Asmussen don’t remember who made the first phone call, but both recall the Kratos crossover talks starting early in Mortal Kombat’s development cycle. “I remember somebody saying, ‘‘hey, there might be this possibility of Kratos appearing in Mortal Kombat,’” Stig remembers. “I said, ‘ You gotta be kidding me, we gotta make this happen! Let’s get on the phone.’” Describing himself as a “huge God of War fan,” Boon was all too eager to work out the details and spark a larger collaborative effort between both studios.

Capturing “the real Kratos” in Mortal Kombat was a prime goal for Boon and Netherrealm Studios, but it wasn’t always an easy one. “The God of War team set certain ground rules,” Boon says. “From the beginning, we were absolutely set on respecting the character.” Boon describes a “receptive” relationship with Sony Santa Monica Studios – creators of God of War – during development of Kratos’ Mortal Kombat incarnation, with Boon’s and Asmussen’s teams regularly trading feedback and ideas. Absolute authenticity being a key consideration, Boon’s team went so far as to use Kratos’ God of War III character model as a reference asset. “Once we started sending playable builds of Kratos, that’s when they got specific regarding things like animation,” Boon recalls. Particularly regarding Kratos’ fatality, which went through a number of edits and revisions due to feedback from Sony Santa Monica Studios. “It was mostly minor stuff, certain tweaks to the animation,” Boon remembers. “We went through a lot of iterations, but in the end, when you look at that screen, you see Kratos.”

Asked about his favorite aspect of this chaotic crossover, Boon answer comes easily. “Just seeing Kratos and Scorpion on the screen at the same time. You never thought you’d see that.” Boon loves God of War and, in particular, Kratos because he’s “unapologetically brutal.” The feeling is mutual – Stig is a longtime Mortal Kombat fan, too. “One of the strongest points of Mortal Kombat has always been the character design,” he tells Boon. “You’ll see a character and you’ll know it’s a Mortal Kombat character.”

Kratos’ guest turn in Mortal Kombat wasn’t without a few creative conundrums, of course. As a demigod, Kratos is not one to show vulnerability. So at first, seeing the all-powerful Kratos torn to pieces by the likes of Shang Tsung – in glistening HD detail thanks to Mortal Kombat’s gruesome character damage modeling – came as a bit of a shock to Sony Santa Monica Studios. “The things that were being done to Kratos were not things that we were used to seeing,” Stig confesses. “It’s taking it to an almost uncomfortable place at times because here Kratos can get his ass kicked.” On the other hand, Boon points out, “Kratos is in the mud like everybody else.”

“I will say that I’ve never seen his skull before this game,” Stig counters with a laugh. “But man,” he adds, “you guys really pulled through. I’m proud of that game.”

Yes, Kratos has an ending. But there’s a catch. “From the start, we decided we wouldn’t put him into the Story and have him interacting with Scorpion or things like that,” Boon explained. But when you conquer the Arcade ladder, you’ll get your just desserts. “We do explain what happens when Kratos wins the tournament,” Boon hinted, describing the endings as “a lot more elaborate” than in prior games.

Yes, Kratos has a fatality. No, we’re not going to spoil it here. “We had 10 fatality ideas we wanted to do,” Boon teased. “But the final versions are in line with all the crazy deaths you’ve seen in God of War over the years.” Boon hinted that Netherrealm Studios is making creative use of Kratos’ weapons in designing his kills, adding, “It’s probably over the top, but we’ve always been over the top.”

Yes, Kratos has a stage. And yes, it has a stage fatality. “It has the best stage fatality we’ve put into any Mortal Kombat game ever,” Boon said excitedly without further elaboration. The stage itself was inspired by the end of God of War III, when Kratos battles Zeus in the Chamber of Flame. “That fight had an almost fighting-game mechanic,” Boon said, “so when we saw that we thought, “It’s writing itself!”

Yes, Kratos is being carefully balanced. How do you balance a character who is practically omnipotent? Not an easy question. “Kratos is interesting because his God of War fighting style is so long range – it’s designed for crowds,” Boon said. That approach won’t necessarily fly in a one-on-one fighting game, so Mortal Kombat emphasizes Kratos’ close-range brute strength and reserves the long-ranged attacks for special moves. “Anyone who loved MKII or MK3, which are particulatly combo-centric, are going to be happy with Kratos.”

Yes, Kratos uses X Weapon. “He has more weapons in this game than any of our other characters by a factor of two,” Boon confirmed. We spotted Apollo’s Bow, Cestus, Blade of Olympus, Helios Head and, of course, the Blades of Exile.

No, Kratos won’t participate in Test Your Might. “We’re not too shy about putting our Mortal Kombat characters in silly situations,” Boon said. “There’s just no humorous side to Kratos,” Boon said. “You’re not going to see Kratos do a Friendship … we kept him out of those situations out of respect.”