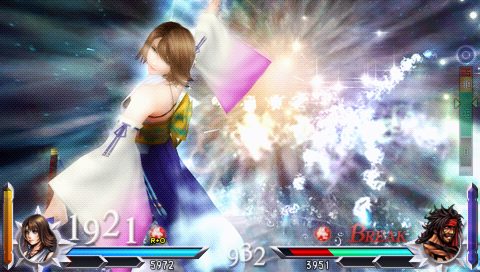 With DISSIDIA 012[duodecim] FINAL FANTASY out this week, I thought I’d share some videos that show the various EX Burst attacks. You can watch them below!

But first: what is an EX Burst? EX Burst is equivalent of a super move in a game like Street Fighter. Each character has a special move which you’ll recognize from their original game. During the EX burst, you’ll have to input several button cues but each is customized for each unique character. For example, Tifa’s EX Burst features the same slot reels for her Limit Break in Final Fantasy VII. For Tidus, you’d have to align the cursor in the target zone like his Overdrive attack in Final Fantasy X. For Squall, you’ll have to pull the trigger just like in Final Fantasy VIII. The more successful you are with the button cues, the more devastating the attack.

The EX system is actually more than a special move because, during battle, you’ll have to fill up a meter called the EX gauge. Once it’s full you can activate EX mode, your character will be stronger for a limited time. You can also use the EX system to get yourself out in a tough situation. When being attacked if you activate the EX gauge, you can engage EX Revenge, which is a newly added system in DISSIDIA 012[duodecim]. While in EX Revenge, time is slowed around you giving you chance to get even.

Hope you enjoy the videos (you can watch two more here) and DISSIDIA 012[duodecim]! It’s available for the PSP starting tomorrow.