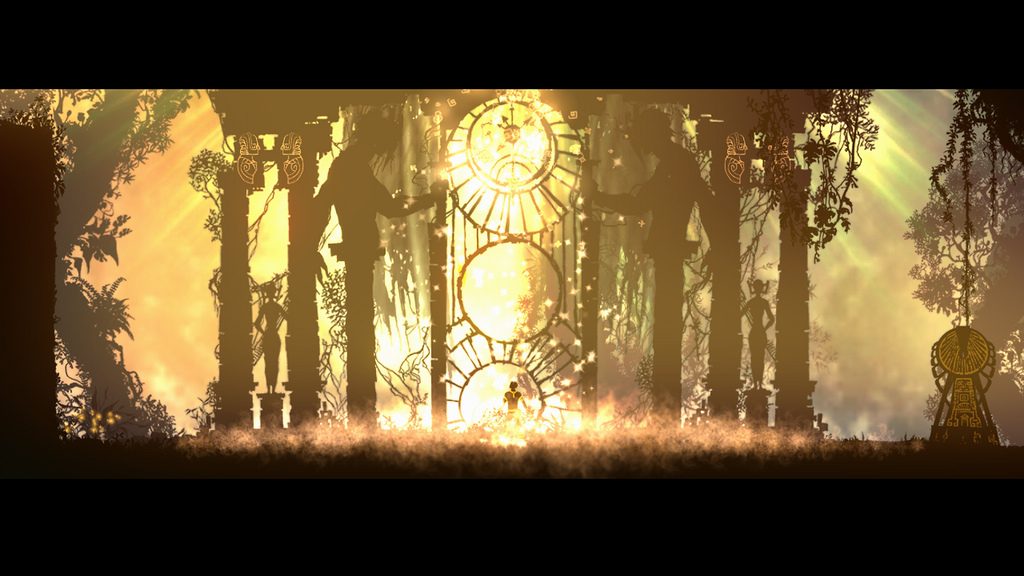 Last fall I was introduced to Outland, a side-scrolling PSN action game that casts you as an urban nobody turned spiritual warrior. The dreamlike visuals, acrobatic platforming and sharp swordplay showed plenty of promise. Since then, developer Housemarque (creators of Dead Nation and Super Stardust HD) has fleshed out the game with a more fluid feel and gameplay depth that will make fans of the classic 2D side-scroller Castlevania: Symphony of the Night beam with delight.

A gorgeous introductory cinematic introduces you to the protagonist’s plight. As a nameless, faceless modern-day city dweller, you’re haunted by visions of a vast wheel endlessly turning. Maddened by the hallucinations, you seek out a shaman who guides you on a path of spiritual awakening and an uncomfortable truth: You’ve been chosen to fight in a timeless, cyclical battle with a pair of god-like Sisters who created the world and now seek to destroy it. Lucky you! “The Sisters are the final bosses in the game,” Producer Adam Sarasohn confirms. “They are the ones causing this conflict.” You’ll learn this firsthand in the opening moments of the game when you dive into a playable vision set 30,000 years in the past. Re-living the conflict as an ancient hero, your spiritual predecessor, this short flashback sets up the final struggle against the Sisters but cuts away just as the ominous battle begins.

Outland’s sword-based action, fluid acrobatics and free-roaming exploration will strike a chord with fans of Castlevania: Symphony of the Night, but there’s a twist: You can shift between blue and red energy alignments with a quick tap of the L2 button. In the blue form, you’re immune to blue projectiles and enemies but vulnerable to red threats, and vice-versa. You’ll need sharp eyes and keen timing to best Outland’s most challenging moments, which flood the screen with dizzying color-coded projectile patterns complete with enemies and platforms to negotiate.

Luckily, your protagonist runs, jumps, and climbs with limber grace and swings a sword like he means it. Over time, his abilities evolve to include a sliding attack (also useful for accessing secret crawlspaces), a stone-shattering stomp, extended wall-hanging stamina and and more. These skills will be especially valuable during the game’s massive boss battles, such as one epic encounter that pits you against a telekinetic High Priestess who attacks by hurling pieces of the surrounding environment at you. “After a while,” Sarasohn teases, “the entire room breaks apart and starts falling, and you’re jumping up pieces of rubble while you fight her in mid-air.”

In addition to its single-player quest, Outland includes an Arcade mode that challenges experts to speed-run through scenarios with the highest score possible. But at PAX East, Sarasohn also revealed that Outland includes online two-player cooperative play that comes in two distinct flavors: Story Co-op and Co-op Challenge rooms. While playing the Story mode with a friend, you’ll occasionally find and unlock a Co-op Challenge room that warps the established gameplay rules. One example tasks you with controlling the color of your partner and yourself — a tall order when the air is thick with red-and-blue projectiles and you’re only worried about saving your own skin. Then, in a sadistic twist halfway through this particular Co-op Challenge, your partner assumes color control. Gulp!

If you’re wondering why Outland’s co-op modes are limited to online play, Sarasohn says it’s for a good reason. Split-screen co-op was definitely not an option. “We wanted each player to have a full screen so they can see all the puzzles and not have to make blind jumps.” And though developer Housemarque had experimented with a co-op mode that constrained both players to one screen, they ultimately abandoned the concept because it proved too frustrating.

Outland is scheduled to hit PSN in late April or May. Have questions about the play style? Confused by the co-op features? Shocked by Housemarque’s departure from dual-stick shooters? Let us know in the comments.