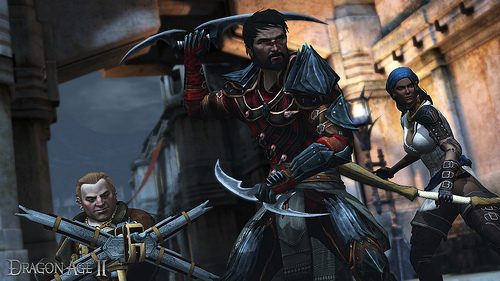 What an outstanding event it was for PlayStation at the Game Developers Conference last week. With big reveals and news on Resistance 3, SOCOM 4, inFamous 2, Mortal Kombat and UNCHARTED 3, the media and community alike didn’t walk away disappointed. Look for a collection of GDC video coverage and interviews this week on the PlayStation.Blog.

Our PlayStation first party titles keep on coming and delivering our distinctive brand of gaming when MLB 11 The Show arrives this week, featuring pure analog controls, 3D and PS Move support. Looking better and hitting harder, Dragon Age II (you may of heard of it,) also drops this week, introducing fans of the series to a whole new story spanning 10 years in the Dragon Age universe.

PlayStation Plus members get to enjoy the taste of lush and succulent fatalities when the demo for Mortal Kombat arrives on PSN exclusively for PS Plus members, in 3D (optional.) Finally, ladies and gentlebugs, larvae of all stages, PSone Classic launches a new category on PSN when Disney opens their vault to their collection of PSone gaming classics.

This week’s The Drop is nothing short of a Flawless Victory!

MLB 11 The Show (PlayStation Move & 3D Enabled) (Also on PSP) — MLB 11 The Show is set again to provide fans with an unparalleled baseball experience with even more features and modes destined to quicken the heart, raise the stakes, and hurl you further into the true MLB baseball experience. Leading off on the new features set for PS3 is the addition of the Pure Analog Control System, which includes analog controls for hitting, pitching, and throwing, adding more precision and accuracy to all three disciplines.

Next up is the newly added Co-op Mode, which allows up to four-player offline or online cooperative play where gamers can split duties covering either the infield or outfield. The fifth generation of Road to The Show returns in version 5.0 bringing a new interactive slider set to the Create Player process, new training modes triggered by the Player Performance Evaluator, Minor League substitution logic improvements, advancement system improvements that now compare your stats versus your competition in the organization, and the new No Assist Fielding option to make the fielding experience even more realistic.

Dragon Age II — Dragon Age II thrusts players into the role of Hawke, a penniless refugee who rises to power to become the single most important character in the world of Dragon Age. Known to be a survivor of the Blight and the Champion of Kirkwall, the legend around Hawke’s rise to power is shrouded in myth and rumor.

Featuring an all-new story spanning 10 years, players will help tell that tale by making tough moral choices, gathering the deadliest of allies, amassing fame and fortune, and sealing their place in history. The way you play will write the story of how the world is changed forever.

Yoostar 2 (PlayStation Move Enabled) — Yoostar 2 allows players to perform in hundreds of famous movie scenes, record their performances, and share them with friends and family online. Using the sensor of Playstation Eye, Yoostar2 achieves Hollywood green screen style effects without the use of a green screen. In an instant, players can literally step into well-known movie scenes and play the roles of the world’s most famous actors.

Major League Baseball 2K11 (Also on PSP) — This year’s edition offers improvements in the fielding system to ensure better control of the ball against the advancing runners. Each player has been re-created in the game down to the last detail, with performance stats based on live data to match the realistic looks. And with My Player Mode, gamers can look beyond the league and their team to focus on just one player that they guide through a Minor League career all the way through the ranks to step out on the field as a big league star.

TestYourself: Psychology — The goal of TestYourself: Psychology is to provide users with an affordable, professional assessment of various aspects of their personalities and psychological abilities. After the release of the initial pack, new blocks of tests will be available for download on a monthly basis, each focusing on different elements of psychological health. Users who complete all 12 blocks will receive a full psychological portrait and will understand the complex characteristics of their states of mind.

Ultimate Board Game Collection — This portable game is the ultimate collection of classic board games! Play against a computer-controlled opponent, or up to five others either through wireless gameplay or shared on a single system.

R4: Ridge Racer Type 4 — R4: Ridge Racer Type 4 keeps the arcade style intact with all of the powerslides and spinouts fans of the series have come to expect. You take the role of a professional driver in the Grand Prix mode. Pick one of four teams and one of four car manufacturers, and then race on eight tracks. Each team has its own storyline that plays out between races in conversations with your team liaison, and how well you finish changes what the liaison says to you.

Mega Man 3 — The bad news is that the evil Dr. Wily is back in town, but the good news is that so is the blue bomber Mega Man! Take the controls and make Mega Man run, jump, slide, and blast his way through two massive sections with four stages each.