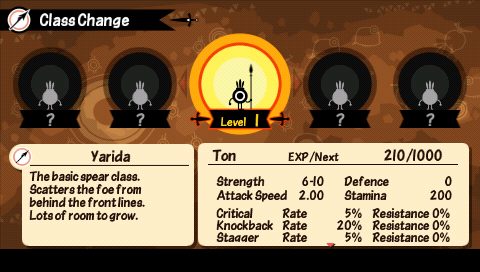 Starting today, we can begin the long-awaited countdown to Patapon 3’s launch on April 12!! It’s been a little over a year since the Patapons forces, led by the masked Hero Patapon engaged in an all-out blitz offensive against the Karmen forces. Many an eye was lost, but the brave mono-ocular warriors pushed through courageously… until they reached the most evil demon warrior this side of Patapolis. So what happened after that intense, life-changing battle at the end of Patapon 2?

To paraphrase, some seriously epic stuff went down. Mind blowing… with a cherry on top.

Victorious and jubilant from their conquests, the Patapon pushed on until they came across an gigantic vessel, locked with ancient magic and scribed up it an ominous message:

Destruction and darkness locked within

Run away and don’t look back

Lest you wish for seven evils to attack!

But, to their misfortune, the Patapon tribe’s newfound arrogance got the best of them. Together they stabbed, poked and kicked until the lock gave way in a thunderous explosion. Before the Patapon could gather the severity of their actions, they were all turned to the hardest of stones. .. all but one lone brave Patapon, Hatapon, the flag bearer.

This is where we rejoin the Patapon saga, on a dark and desolate battle field, surrounded by a sea of stone soldiers and a new evil threatening the very existence of the Patapon world. As there are no troops left, you the Mighty One, will fuse your essence with a fallen soldier and create a brand new hero, the Uberhero Patapon!

Some of you got to experience a small portion of this adventure last summer with the open multiplayer beta. Since then, we’ve been furiously implementing some of the changes requested – and we are very sure that you will enjoy the results of this joint effort.

Available as both UMD disc and PSP PSN download, this fantastic new adventure with new weapons, new levels, new characters and new online multiplayer adventures can go home with you for the pocket friendly price of $19.99 USD.

April 12, your PSP will sing the hypnotizing battle cry we’ve all grown to love: Pata-Pata-Pata-Pon!